Cologne Cathedral – the completion of the Gothic style

In 1772, an anonymous pamphlet “Von Deutscher Baukunst” (“On German Architecture”) was published.

In view of the Strasbourg Cathedral, the author is almost overwhelmed by the master builder’s achievement, the genius of the building, the purity of the forms.

It is Johann Wolfgang Goethe who visits Cologne a few decades later, now no longer anonymous. Sulpiz Boisserée, a native of Cologne, art collector and enthusiastic advocate of further construction of the cathedral, had previously brought his friend Goethe visionary drawings showing a completed cathedral. During his visit to the torso, which had been left to decay for centuries, Goethe probably did not feel nearly the same enthusiasm as he did in Strasbourg, for there were no comparable statements. Nevertheless, he arranges for the printing of Boisseré’s drawings and thus becomes one of the most popular advertisers for the further construction of Cologne Cathedral.

While Goethe praises “German architecture,” Friedrich Schlegel recognizes in Gothic the flower-like and plant-like, whose true origin is the deep German feeling for nature. And Josef Görres, editor of the Rheinischer Merkur, writes that the completion of the cathedral documents the liberation from French rule. 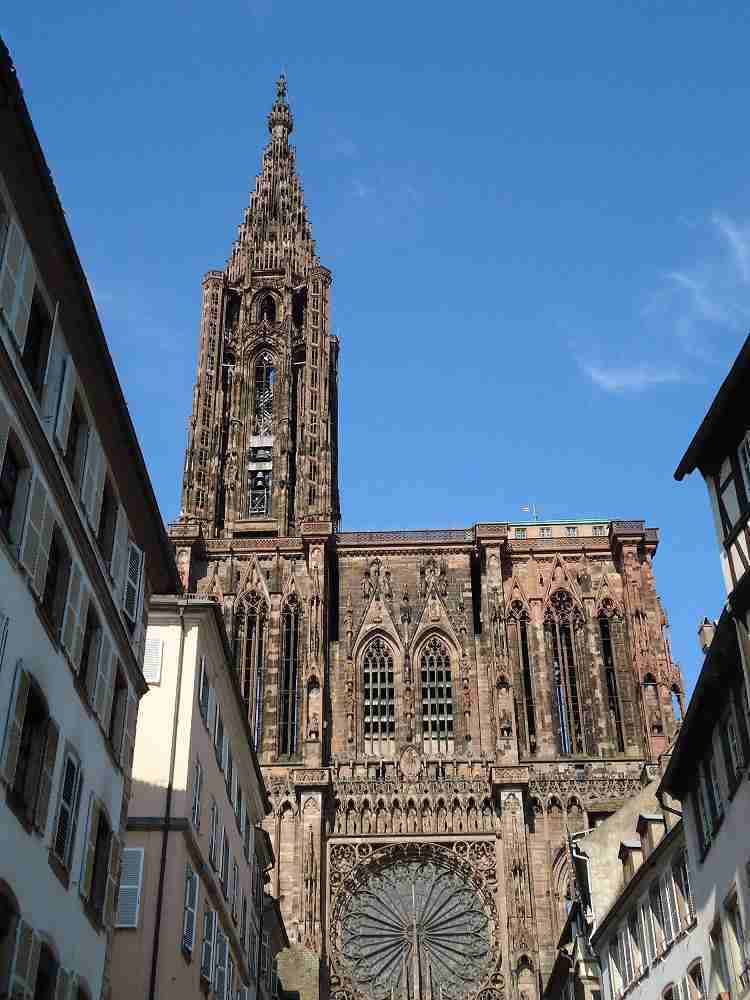 The cathedral with its twin towers becomes a national monument. It is the time of Romanticism, and the national idea falls on fertile ground. Frederick William IV, Protestant King of Prussia and in permanent conflict with the Archbishop of Cologne, puts the idea of reconciliation with the Rhineland first. He agrees to a further construction of the Gothic cathedral.

The origin of Gothic may have been July 14, 1140. On this day, Abbot Suger starts the new choir construction of his abbey church in St. Denis. His abbey church is of outstanding importance because the French kings find their resting place here. King Louis VII personally attended the inauguration of the choir in 1144. The king’s presence testifies to a great interest in the new architecture. Three years later, Louis sets out on the Second Crusade. He visits the holy sites in Jerusalem, including the al-Aqsa Mosque on the Temple Mount. Since the First Crusade, the mosque has served first as headquarters for King Balduin II, then for the newly founded Order of the Templars. 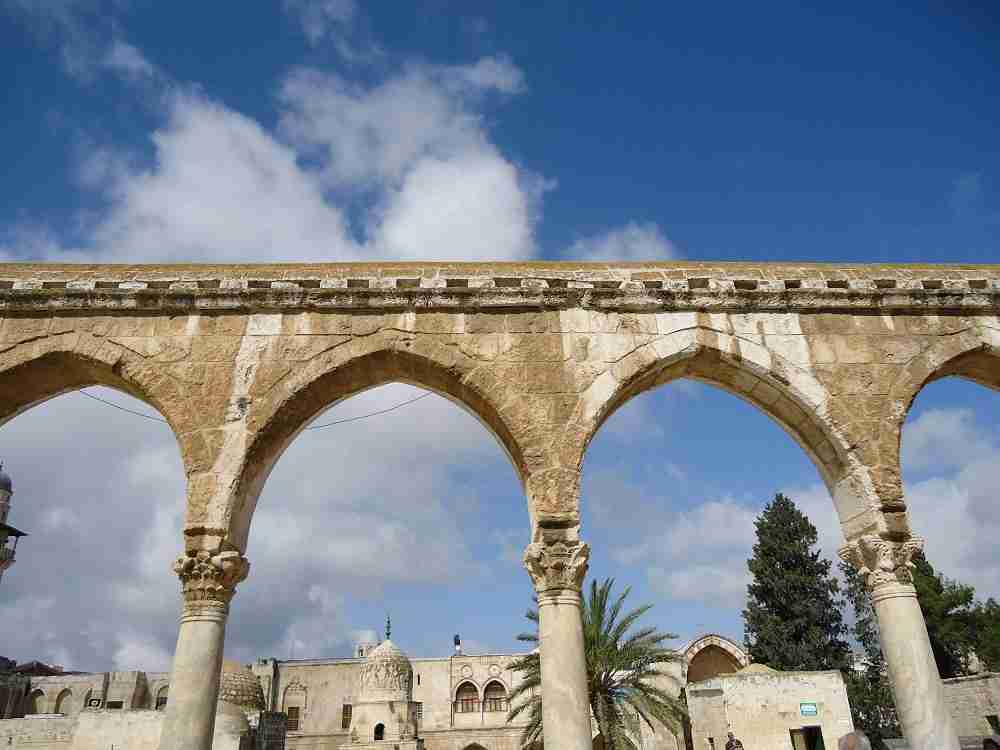 The al-Aqsa Mosque was built in the 8th century. An arcade is located in front of the mosque. Each individual arcade is crowned by the pointed arch typical of Islamic architecture. The Islamic ornamentation creates new tension, a touch of the Orient, when Jerusalem is the cradle of Christianity.

It may be that the first crusaders and also Louis VII found pleasure in this ornamentation. In any case, St. Denis exemplifies the transformation from Romanesque to Gothic. The Romanesque round arch can still be seen on the upper tower floor, while the pointed arch dominates the interior. At the same time, the ashlar massing of the Romanesque period gives way to the stonemasonry articulation of the Gothic period. 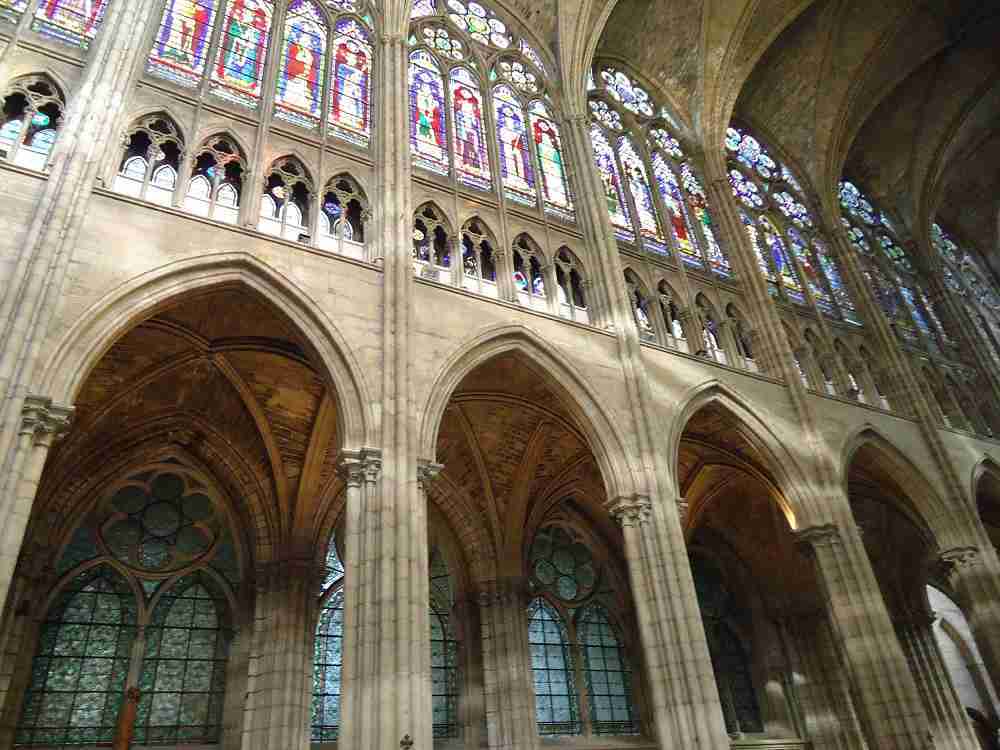 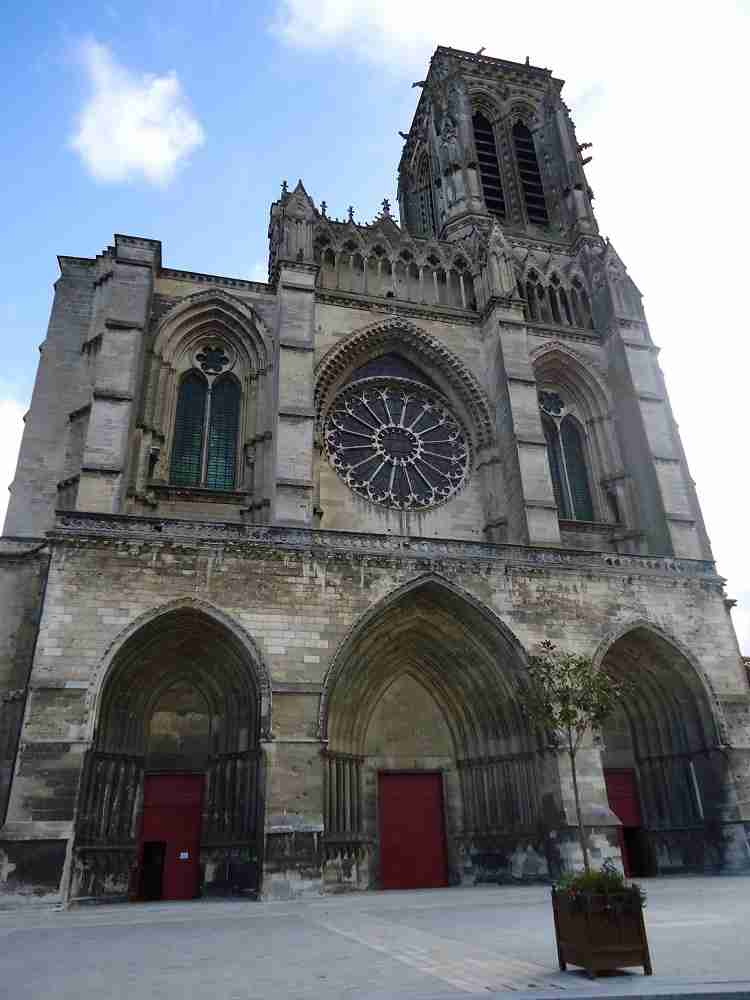 It is the spirit of the times that heralds a new era in architecture. Technically, inventions such as the construction crane, the wheel, and the scale construction drawing allowed the naves of the church to reach new heights, towards the sky. Cross-ribbed vaults resting on bundle piers span the nave. The vault thrust is supported externally above the side roofs by buttresses and buttress arches. 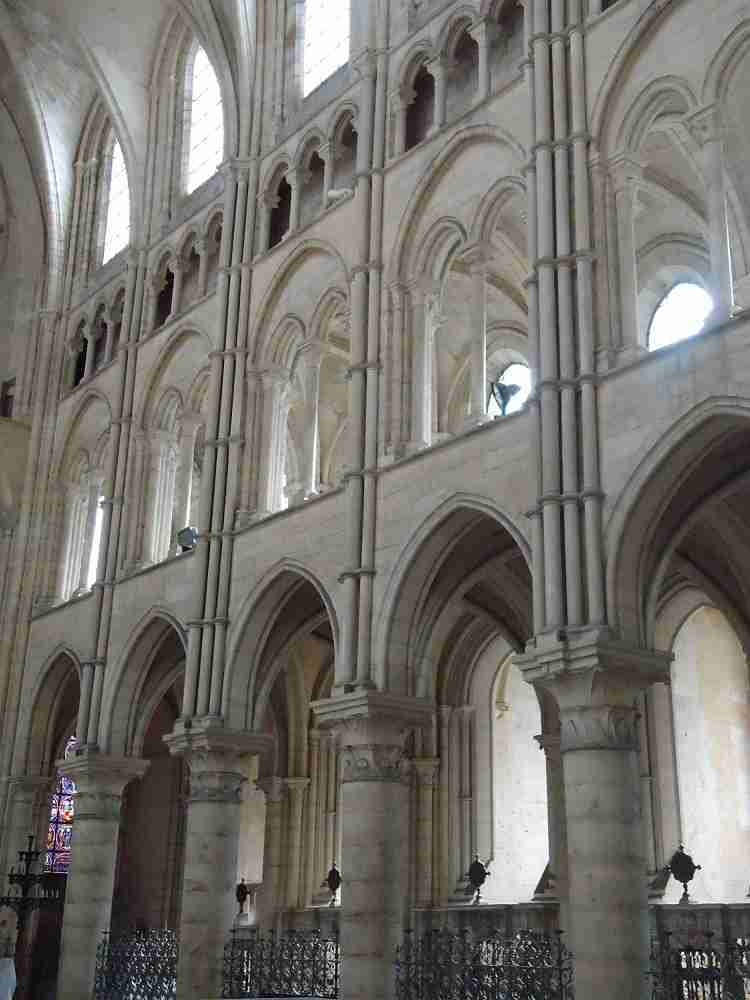 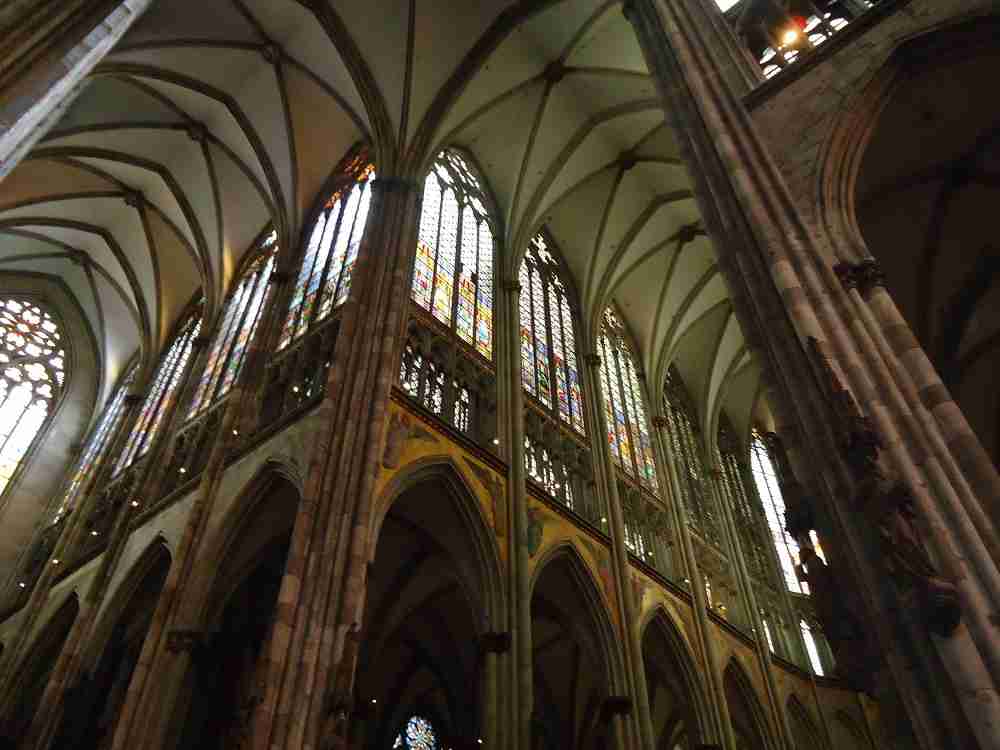 Theologically, the new cathedrals with their ribbed vaults depict the heavenly Jerusalem on earth. The window tracks bring forth “mystical” light. Scholasticism sees light as a symbol of the perfect body.  The fullness of light allows more of the divine to flow in. For Thomas Aquinas, light is part of beauty in the context of his doctrine of God. The epitome of perfection is the circular western rose. 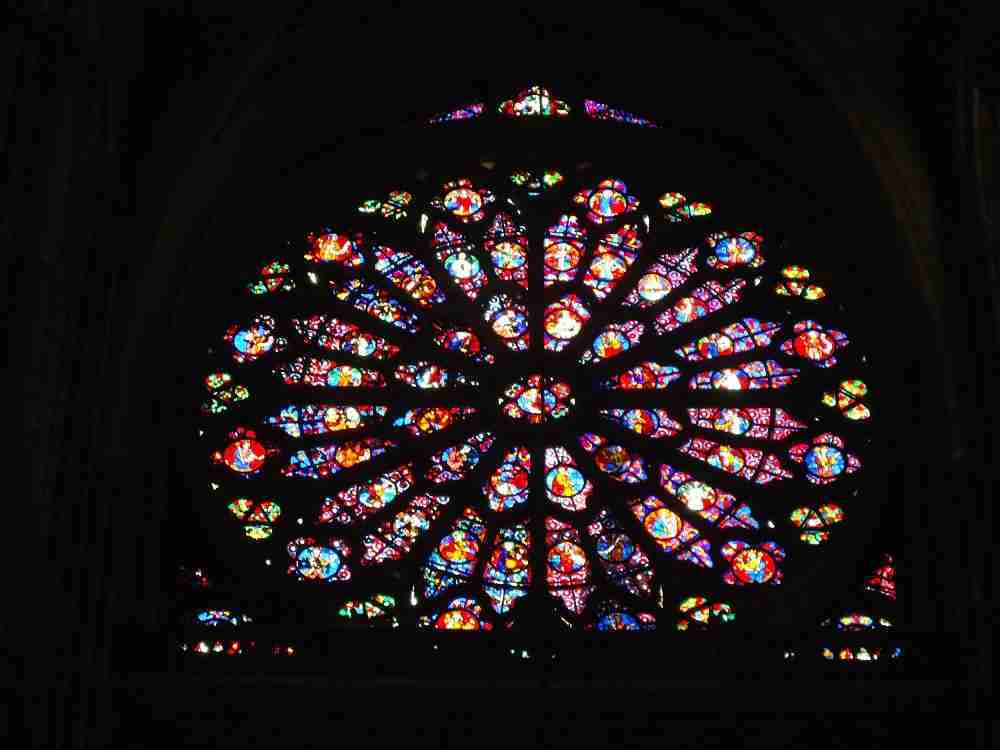 Whereas the Romanesque period symbolically warded off evil with a mighty bulwark in the west, the rose in Gothic buildings carries God’s message out into the world.

Politically, it is the rulers who push the new architecture. Abbot Suger is a close confidant of Louis VII and is even appointed regent of the country during his crusade. Under Louis VII, construction begins on Notre Dame on the Île de la Cité, the cathedral in honor of Mary, the Mother of God. King Louis IX builds the Saint Chapelle to make accessible to the Christians of the West the Crown of Thorns of Christ, parts of the Cross and the tip of the Holy Lance, which he acquired for a great deal of money in Constantinople. 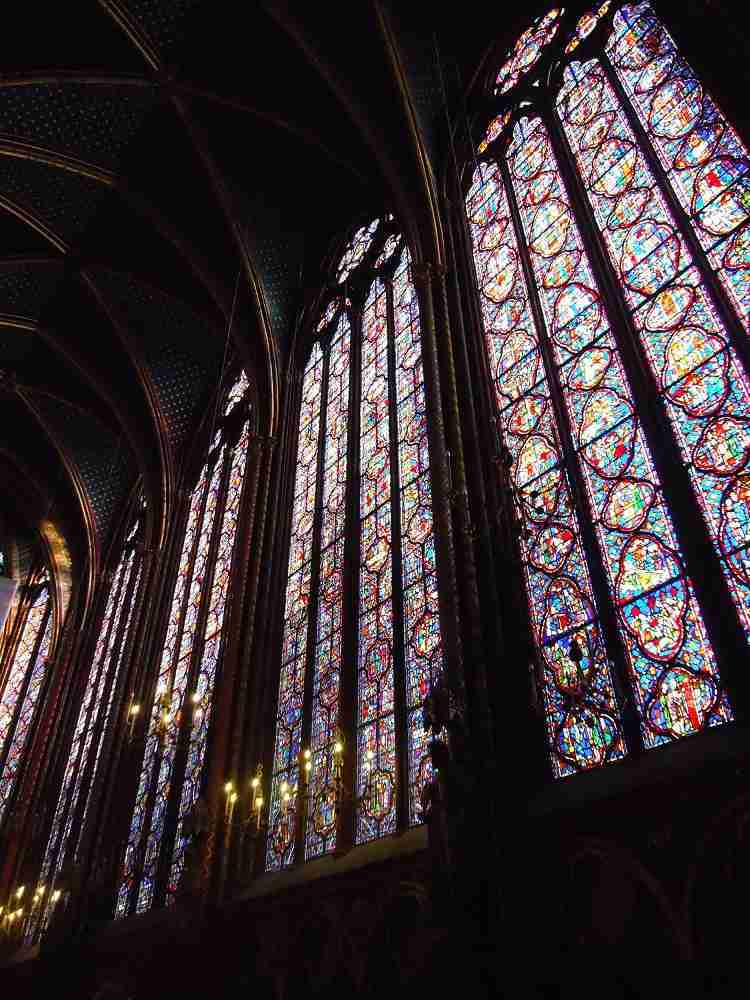 Chartres, an important place of pilgrimage to the Virgin Mary, is being renovated in Gothic style after a fire. It touches pilgrims from afar how the two towers stretch towards the sky in the flat Beauce plain. 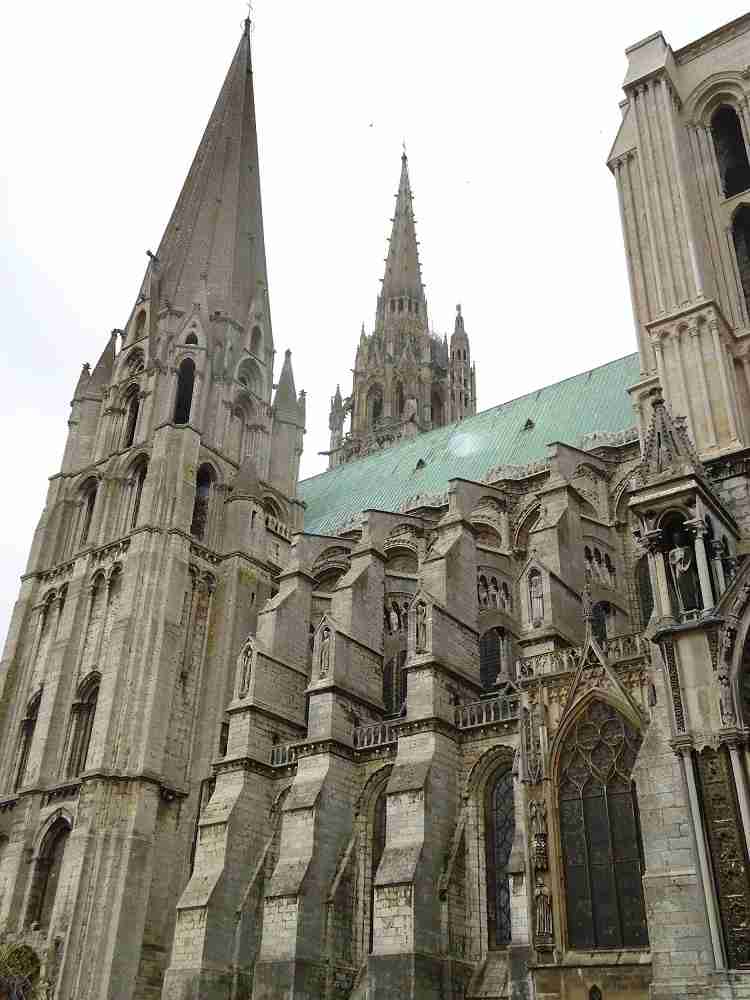 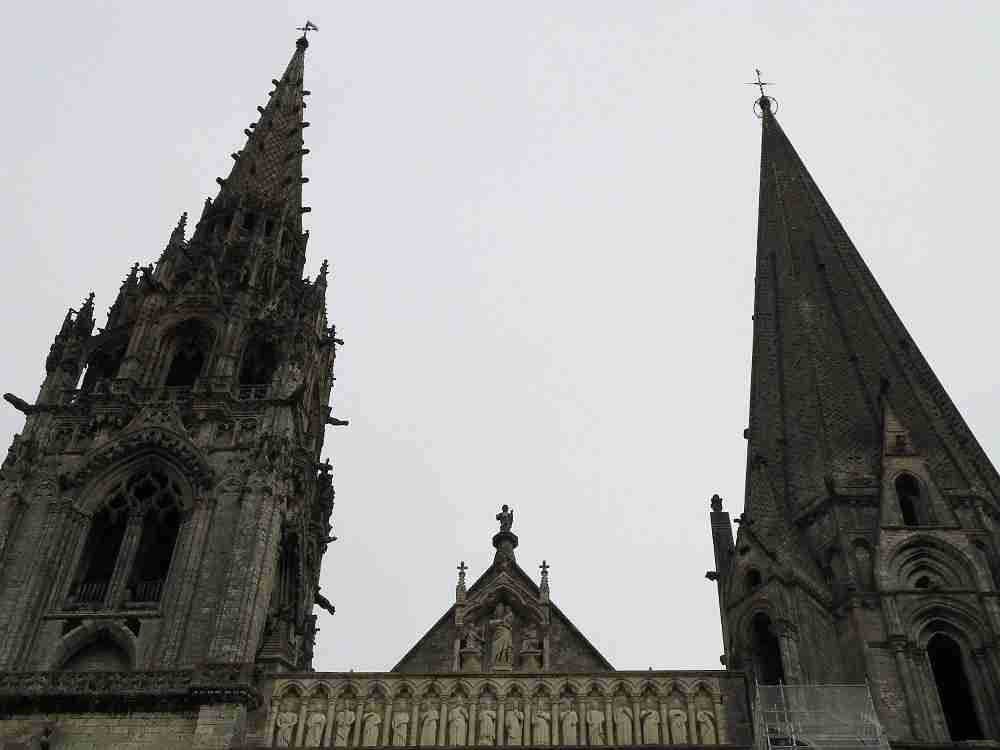 In Reims, the coronation site of the French kings, the foundation stone for the construction of a representative cathedral was laid in 1211. The west façade depicts Clovis receiving baptism in Rheims and paving the way for Christianity to rise to power. The west rose remains unsurpassed in competition with other cathedrals. 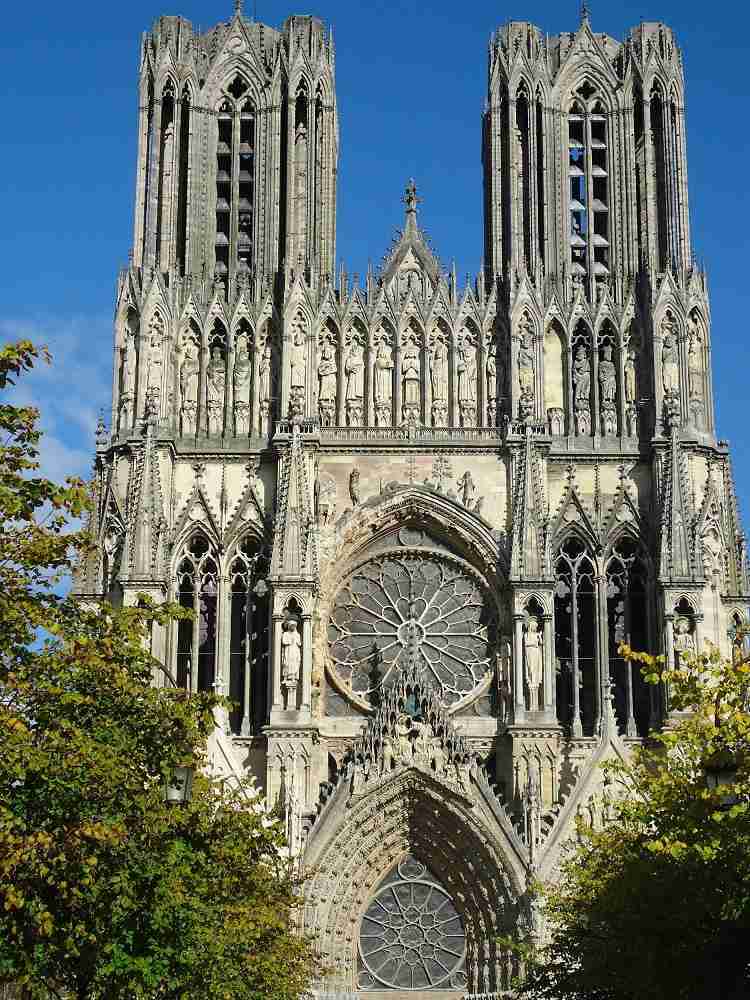 Gothic marvels were created in the surrounding bishoprics, such as Noyon, Laon, Soissons. 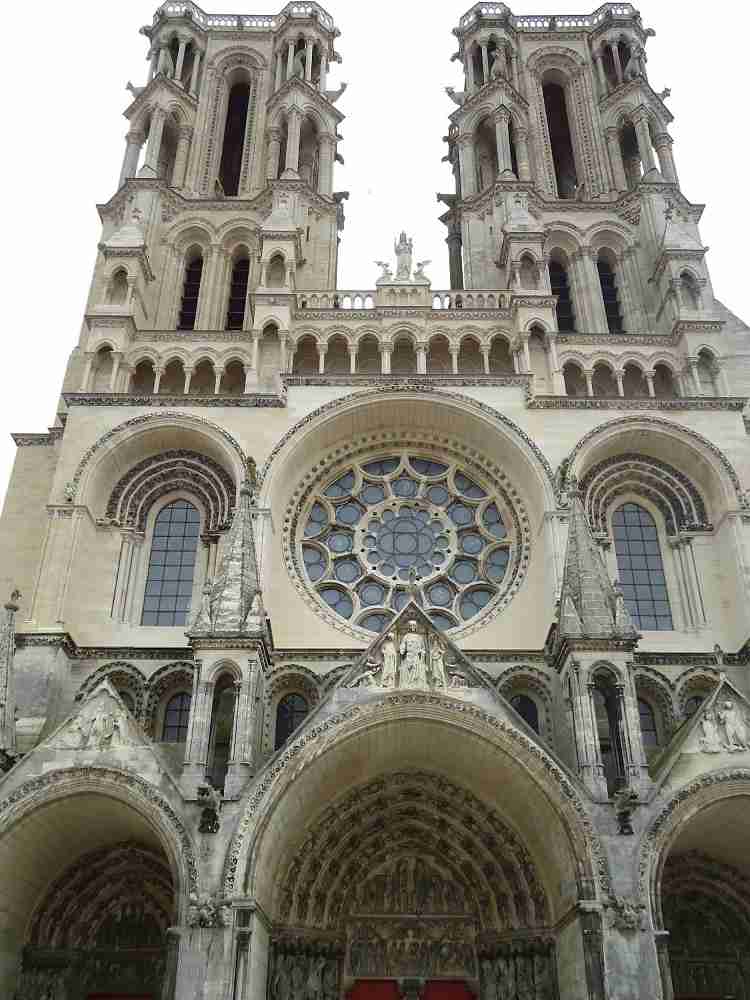 The bishops compete with the interior height of the church. Amiens reaches an interior height of 45 meters. Beauvais ventures to 48 meters, but the vault above the choir collapses. Despite repeated building efforts, the nave remains unfinished except for one bay.

The builders of the cathedrals, with their experience, are also sought after outside France. The master builder of Sens travels to Canterbury and initiates the beginning of Gothic in England. 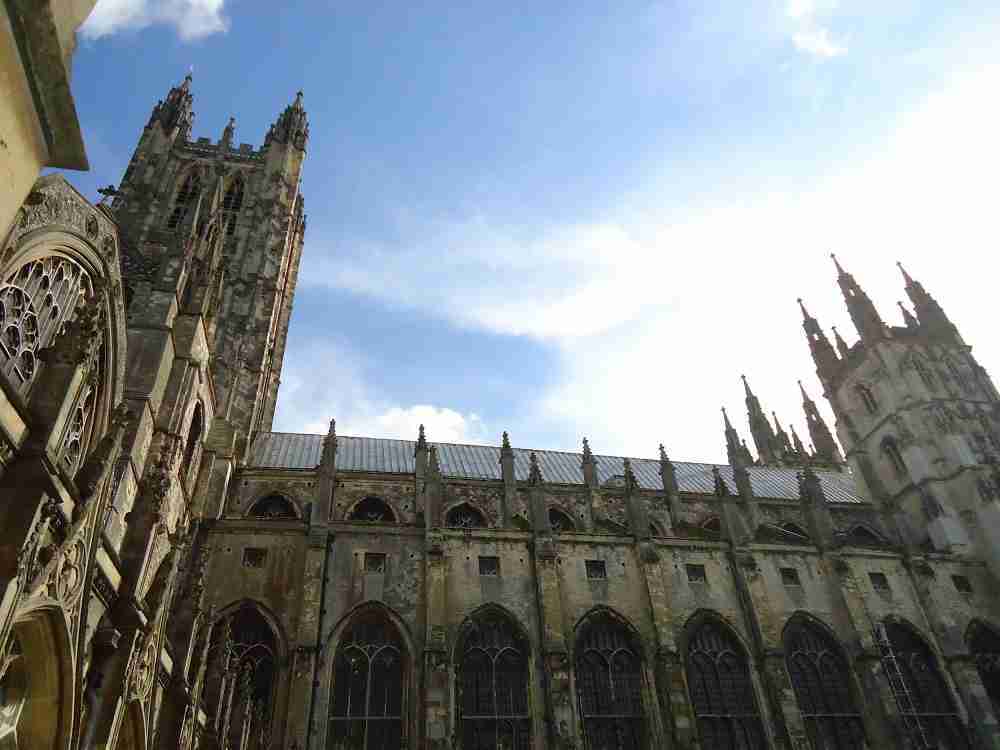 Master Gerhard works successfully as a master builder in Amiens. 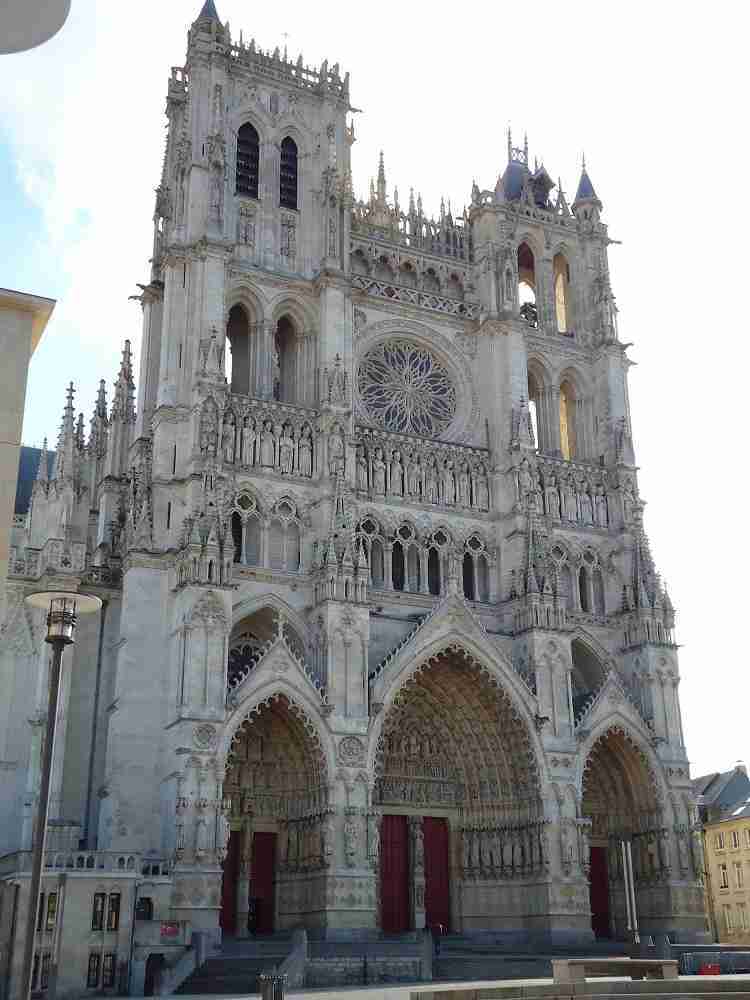 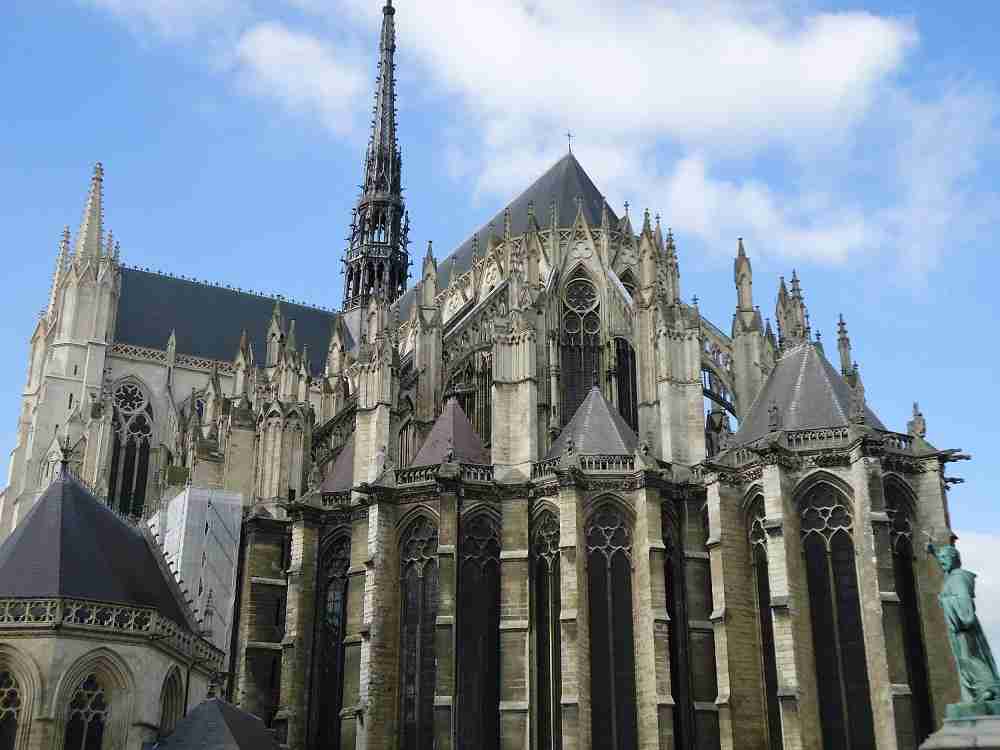 From there it comes to Cologne, where Archbishop Konrad von Hochstaden lays the foundation stone for the construction of a cathedral in 1248, which should first of all lead the pilgrims via a monumental choir gallery to the golden shrine of the Epiphany. The goal was reached in 1322. The choir with its high altar and the largest choir stalls in the Christian world with 104 seats is consecrated.

The further building activity is manageable. The nave is built up to the height of the side aisles and covered with an unadorned roof. The south tower in the west reaches a height of 56 meters in 1446 and houses the Pretiosa and Speciosa bells, which still call to prayer today. Then the Reformation destroys all plans for the future, and around 1560, work in the cathedral’s construction workshop comes to a halt. The wooden crane on the unfinished south tower dominates Cologne’s cityscape for centuries.

The Renaissance follows the Gothic. The Florence Cathedral, with Filippo Brunelleschi’s massive dome, is already inaugurated. In Rome, Michelangelo Buonarotti takes over the construction of St. Peter’s Basilica, and he will once again surpass Brunelleschi’s achievement. Only now Giorgio Vasari, an Italian architect of the Renaissance, assigns names to the building epochs of the past. He calls the building epoch of the ashlar mass construction with its round arches, ideally realized in Rome in the Colosseum, Romanesque. The building epoch of the French cathedrals and the “German architecture” in Strasbourg and Cologne, is unappealing to him. The church buildings seem cold and soulless to him, and he names the style “Gothic” after the culturally illiterate people of the Goths. The “stilo gotico” is considered his neologism. He will have excluded the Milan Cathedral, because when construction began, the late Gothic period had already dawned, and a facade clad in marble could in no way appear cold and soulless to an Italian art critic. 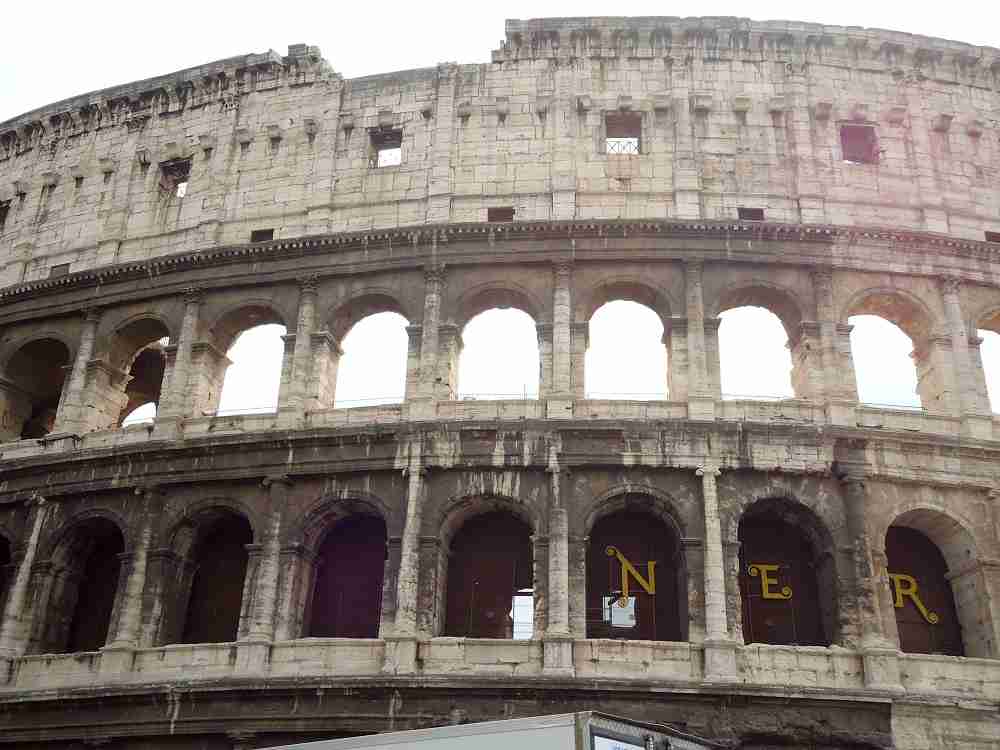 In 1842, Friedrich Wilhelm IV lays the foundation stone of Cologne Cathedral for the second time. Sulpiz Boisserée’s lifelong dream comes true. Overwhelmed by the feeling, he bursts into tears, or so he confides to his diary that evening. Ernst Friedrich Zwirner, who had studied under Karl Friedrich Schinkel, came from Berlin and took over the construction management. The design of the transept is his masterpiece. There are no models for this central structure with its three vaulted portals to the north and south. Zwirner succeeds in immersing himself in the Gothic style and creating a transept that is convincing in its harmony with the medieval choir. 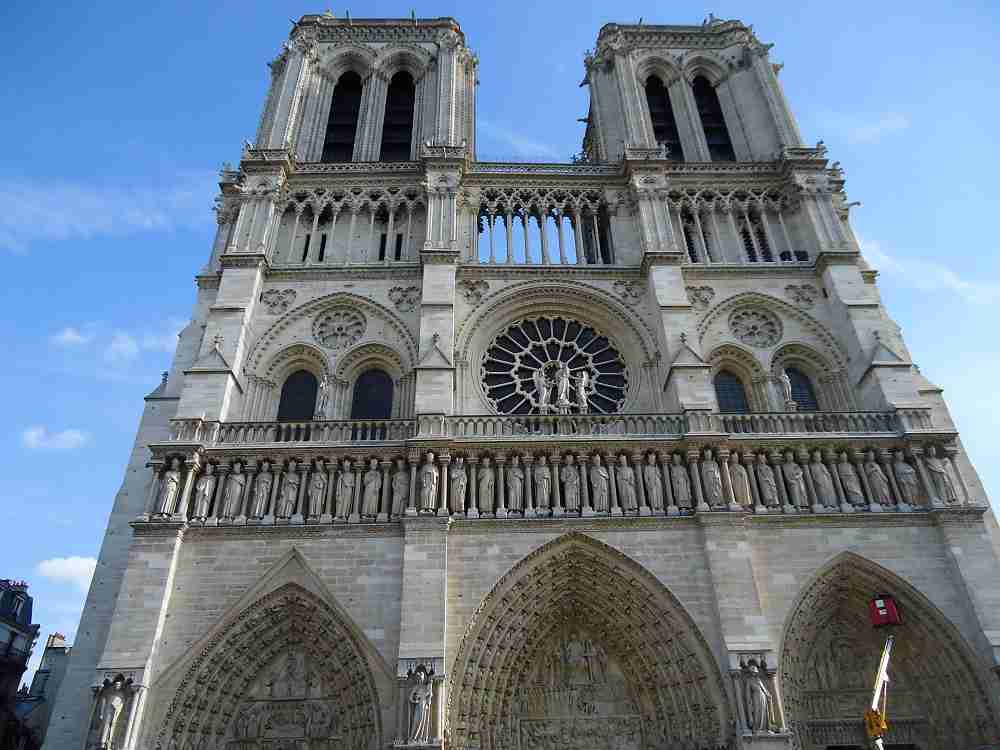 For the west facade with the double towers the original drawing of the Middle Ages is available. It is an elevation of 20 parchments glued together, lost in the meantime, but miraculously found again. With the help of modern techniques, a steam engine, rail vehicles and iron materials, the towers grow up at a rapid pace. The scaffolding at dizzying heights suggests that such a feat would not have been possible in the Middle Ages. The towers are the trauma of the Gothic.

Strasbourg Cathedral has only one, as does the cathedral at St. Denis, after the much taller dilapidated north tower was demolished in the 19th century.

Chartres’ towers look like fraternal twins; the spires of the cathedrals of Notre Dame and Reims are not even built.

In 1880, Cologne Cathedral reaches the height of 157 meters, a historical pageant celebrates the end of further construction, and the Gothic style finds its completion. 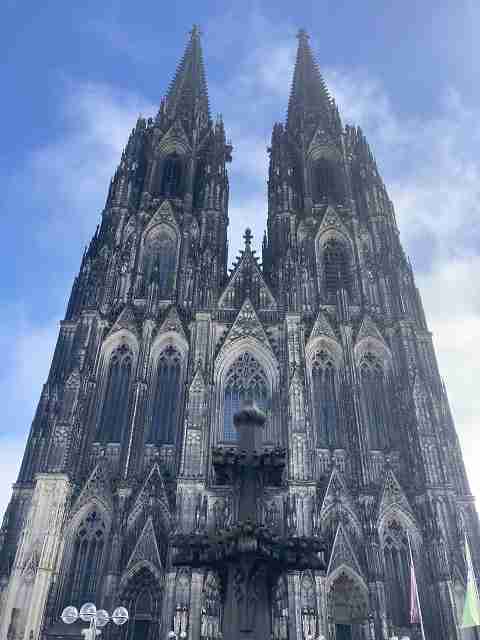