Cultural History of the Wiener Schnitzel

In 1848, Europe was rumbling. In all corners of the continent, there were uprisings against the traditional rulers, who tried by all means to control the displeasure of their subjects.
But the ideas of freedom and political participation, once put into people’s heads by the French Revolution, could no longer be suppressed even by the strongest repression.

In Italy, too, the people rose up, but here the struggle took on a special colour.

For the Apennine Peninsula, once the proud heartland of the Roman Empire, was fragmented into small and tiny dominions and was no more than a pawn in the hands of foreign powers.

In the early 19th century, therefore, the idea of the “Risorgimento”, i.e. the unification of Italy’s independent principalities and regions into an independent nation state, began to spread.

In 1848, in the wake of the Europe-wide unrest, the time seemed to have come to put these plans into practice.

The struggle began in the south as an uprising against the Bourbons and soon spread to the northern parts of the country occupied by the Habsburgs. Starting in Milan and Venice, the people rose up and after a short time the Austrian troops had to retreat to their fortresses. 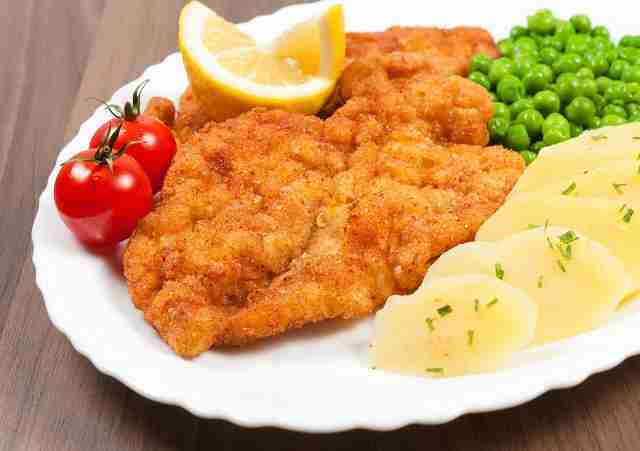 But within a year the tide was to turn completely.

The Habsburgs not only suppressed the unrest in their heartlands, but the Italian uprisings were also put down.

As a result, Lombardy finally fell to the Empire of Austria and Franz Joseph I appointed the victorious Field Marshal Count Radetzky as Governor General of Lombardo-Venetia.

During his time there, Radetzky is also said to have become acquainted with the “cotoletta alla milanese”, the Milanese cutlet, which originated in the 15th century.

He seemed to have been so enthusiastic about it that he sent a note to the Emperor in the margins of a military report and was asked for the recipe at his next audience.

Franz Joseph’s personal chef altered the recipe a little and used juicy pieces of veal instead of chops and the breadcrumbs so beloved in Vienna instead of white bread.

The emperor, who was finally served the dish, was so delighted with it that it immediately found its way into the court’s menu and from here conquered the entire empire.

As beautiful as this story sounds, it is, like many others in this book, unfortunately not true.

For in reality, a wide variety of parts of pork or beef were breaded and baked in copious amounts of fat long before Radetzky.

If you set out on a journey to trace the history of breading, you have to go very far back.

For the origin of breading begins at the moment when people were forced to recycle the leftovers of their food, that is, long before our era.

In order not to waste stale bread, for example, it was grated into crumbs and used as the basis for a wide variety of dishes.

We then find the first traces of baked meat in 12th century Constantinople, where this dish enjoyed great popularity.

But the result was certainly not comparable to what we understand by a Wiener Schnitzel today. For this, the meat used, the type of breading and above all the art of baking were not as accomplished as we know them today. 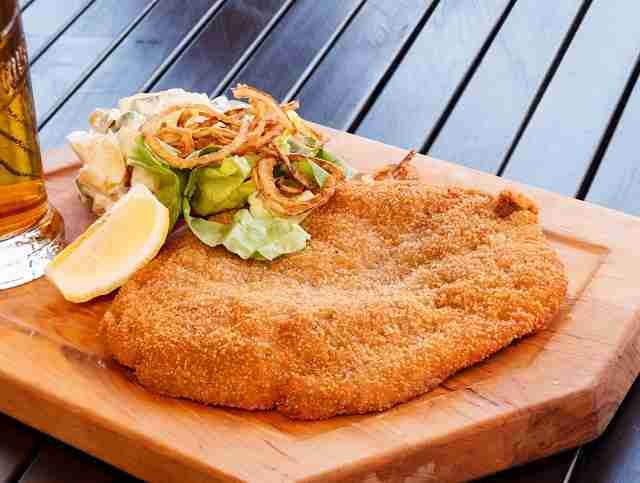 Some time later, at the end of the 15th century, our search takes us back to the north of Italy.

Among the nobles of that time, it was fashionable to decorate their food with gold leaf. On the one hand, this was done for medical reasons, as doctors considered gold to be a cure for the heart, but mainly to demonstrate one’s wealth.

When this custom took on ever greater proportions and thus more and more gold was literally “eaten”, the Venetian council decided to ban it.

Therefore, the cooks desperately searched for a way to keep the meat shimmering golden and remembered a technique they had learned in Byzantium, namely breading, which has already been described.

Thus, within a few decades, this technique was to spread from the kitchens of Venice to the entire Central European region.

The Viennese in particular proved to be enthusiastic adepts of this new method of preparation and soon they were known throughout Europe for breading and baking everything imaginable, from calves’ feet to offal to the tail of beef.

In Viennese cookery books, schnitzel baked in breadcrumbs is found relatively late, namely in Ignanz Gartler’s “Nutzliches Koch-Buch” from 1740, who mentions a “calf schnitzel with Parmesan-Käß and breadcrumbs”.

Which of course could also be a sign that the Viennese were so familiar with this dish that they did not find it necessary to put it down in writing. 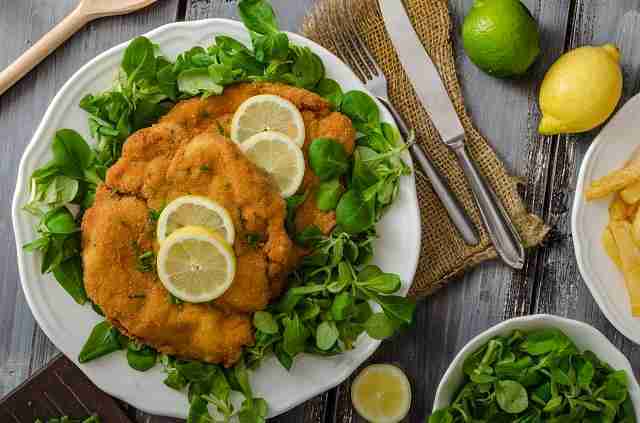 In any case, it is the case today that although baked food was on the table all over Europe, it is the Wiener Schnitzel that is so well known.

So enjoy it and join the army of schnitzel lovers, to which our old Emperor Franz Joseph also belonged.

“… when we came from Gmunden to the plain, the sky cleared up and we arrived in Lambach in beautiful weather, where we had schnitzels made, which we ate with the greatest appetite”.

That’s how the then fourteen-year-old Archduke wrote it in his diary, and that’s exactly what we were to do. A hike in beautiful Styria and, as a finale, a golden schnitzel at one of the many innkeepers of this truly blessed land.

Pat the veal cutlets dry with a cloth. Put cling film on both sides and gently pound them thin. Then salt both sides.

Put the flour and breadcrumbs on separate plates. Crack the eggs into a plate and whisk with a fork.

Turn the cutlets one after the other in the flour on both sides, pull them through the beaten eggs and finally turn them in the breadcrumbs. If necessary, press the breadcrumbs down a little with the back of a fork.

Heat the lard or oil in a high pan. You can tell when the temperature is right by the small bubbles that appear on the handle of a wooden spoon dipped in the fat.

Then place the breaded escalopes in the hot fat and cook them on both sides at medium temperature until golden brown.

Remove the finished escalopes from the pan and let the excess fat drip off on a paper towel.

Supposedly the schnitzels are so dry that you can sit down on them with a pair of Sunday trousers on without risking a grease stain. But who wants that …

Then garnish the schnitzels with lemon wedges, add garnishes and serve while still hot. 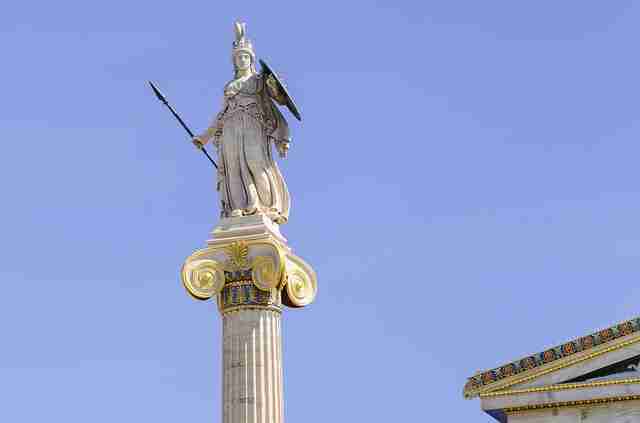