Jan Hus and Jerome of Prague

Places of residence, locations, places of remembrance: Jan Hus and Jerome of Prague in Constance

One of the central themes of Constance’s city history is the Council, which took place here from 1414 to 1418 and at which, after almost 40 years, the Great Western Schism was ended and a new Pope, Martin V, was elected. Many buildings in the city that still exist today played a role during the Council: Council meetings were held in the cathedral, the monasteries and partrican houses hosted important guests, and the so-called Council Building at the harbour was where the papal election took place. At present, however, there are also memories of the condemnation and execution of the two Bohemian reformers and preachers Jan Hus and Jerome of Prague at the Council of Constance. In my article I show you the places where Jan Hus and Jerome stayed in Constance, the places that commemorate them today and the Hus Museum.

Jan Hus was born around 1370 in Husinec in southern Bohemia. Although he came from a humble background, he studied at the University of Prague and was ordained a priest in 1400. He preached in Czech in the Bethlehem Church in Prague and criticised the structure and condition of the church. Among other things, he condemned the sale of church offices, the sale of indulgences and the hierarchical structure of the church.

He drew inspiration for his criticism from the writings of the English church critic John Wyclif (1330-1384). His ideas of the equality of all Christians, his criticism of the church and the conditions in the church were readily received, especially by the students in Prague, and divided the university. Jan Hus, who led the Prague university for one semester in 1409/1410, openly sympathised with Wyclif’s ideas critical of the church. As a preacher, he was also able to bring them to the people. Already accused several times before, he was banned from the church in 1412. In order to examine the charges of heresy, Hus was summoned before the Council of Constance and the king promised him protection.

He arrived in the city at the beginning of November 1414. Hus himself saw this invitation as an opportunity to prove that he sympathised with Wyclif but did not share his “heretical” ideas. He was not given this chance. He was arrested as early as the end of November and was not allowed to speak during the interrogations. He was not given the opportunity to express his views in public. His accusers demanded that he recant. But Hus did not do so. And the king broke his promise of protection: When Hus was burned as a heretic west of the Constance city walls in July 1415, Sigismund attended the execution. 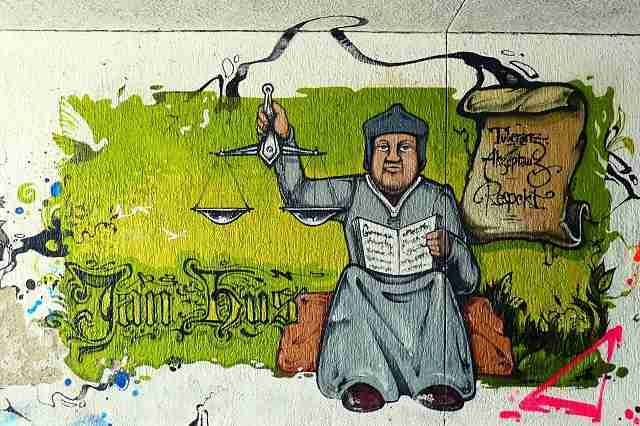 The exact date of birth of Jerome of Prague is unknown, but he was certainly a few years younger than Jan Hus. He studied in Prague and Oxford, and taught at the universities of Paris, Cologne and Heidelberg. In Paris in 1405/1406 he fell out with Jean Gerson, the chancellor of the Sorbonne, and in Cologne and Heidelberg he also made himself unpopular with his speeches. Back in Prague, Jerome was instrumental in the writing of the Kuttenberg Decree in 1409, which strengthened the legal position of the Bohemians and thus the position of Wyclif’s followers at Prague University. Jerome came increasingly under suspicion of heresy and as early as 1410 was charged in Vienna with spreading heresy. He fled and was excommunicated. In the coming years he was on the move in Poland and Lithuania.

“Hus aimed at the practical, credible life of Christianity, whereas Jerome aimed at independent thought, philosophical speculation that questions what is supposedly firmly established. Hus thought ecclesiologically, i.e. always in the context of his Catholic Church. Jerome, for his part, thought philosophically. Hus spoke prophetically, Jerome more provocatively. Jan Hus’ milieu was the congregation, Jerome’s milieu the world of the universities, the courts, the haze of the politically powerful. Jan Hus was firmly rooted in Prague, Jerome was drawn to the world.”

From: Jürgen Hoeren, Winfried Humpert: Jerome of Prague. The Philosopher in the Shadow of Jan Hus, Constance 2016, p. 28f.

On 4 April 1415, Jerome came to Constance to support Jan Hus. Hus had strongly advised him against travelling to Lake Constance, but Jerome did not listen. He only took the warnings seriously once he was there and left Constance again after only two days. From Überlingen, he asked for safe conduct to be able to speak before the council assembly. However, as he received no reply, he decided to return to Prague. He was captured in the Upper Palatinate and brought back to Constance, where he was tried. On 30 May 1416, Jerome of Prague also died at the stake.

Where Jan Hus and Jerome of Prague stayed in Constance 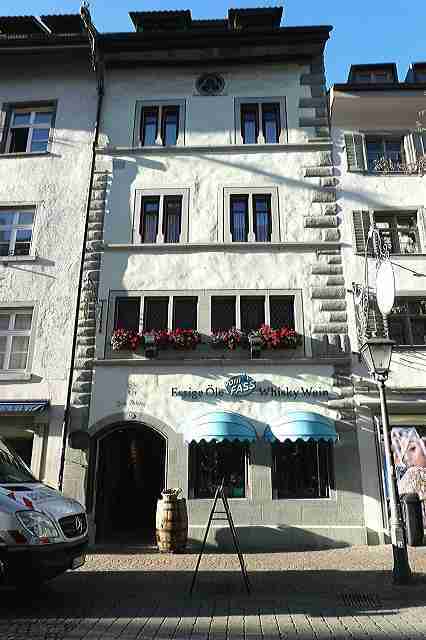 Jan Hus arrived in Constance on 3 November 1414 together with his companions and took up quarters in the house of Fida Pfister in St. Paulsgasse, today’s Hussenstrasse. He lived here until his arrest on 28 November. For a long time it was believed that Fida Pfister was the owner of the building that now houses the Hus Museum. In the 1980s, however, Gernot Blechner, a local historian from Constance, discovered that Hus’ hostel was located a few houses away in the Haus zur Roten Kanne.

During his stay in Constance, Jerome of Prague stayed in the Haus zum Delphin after arriving in Constance on 4 April 1415.
Where. Hussenstraße 14 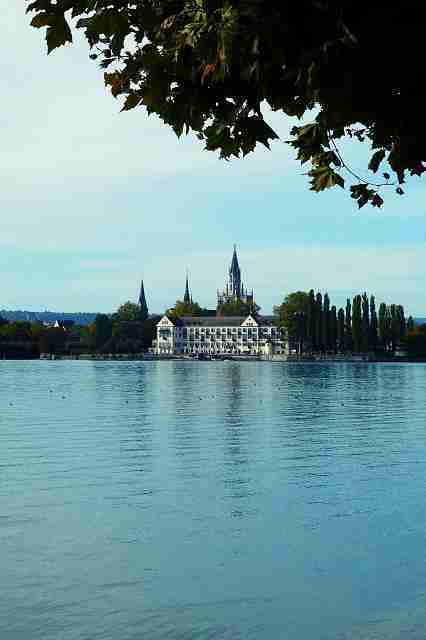 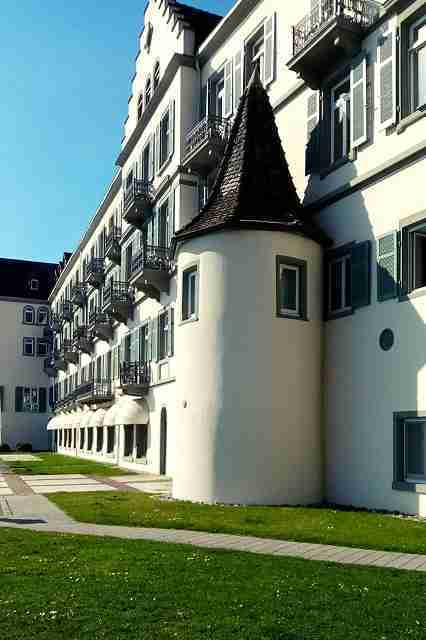 When Jerome of Prague was brought back to Constance in chains on 23 May 1415, he was imprisoned in the city tower near St Paul’s Church. The tower was demolished at the beginning of the 20th century, but the relief commemorating Jerome was reattached to the new building.
Where? Obere Laube 78

Here stood the tower in which Jerome was imprisoned , ©DanielaFrey 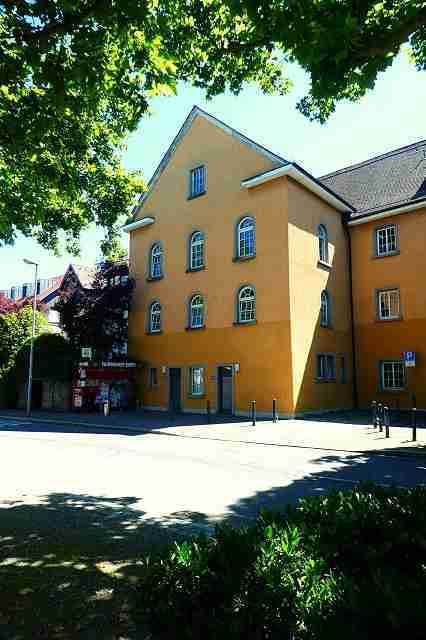 The cathedral was the place where the meetings of the Council took place. It was here that the council assembly made important decisions and it was here that it pronounced sentences on Jan Hus and Jerome of Prague. Hus was sentenced to death at the 15th Council session on 6 July 1415, and Jerome’s sentence was passed and carried out on 30 May 1416. 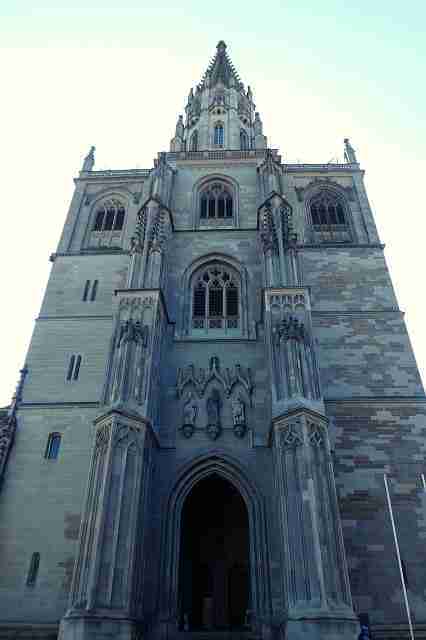 After Jan Hus and Jerome of Prague had died at the stake, their ashes were scattered in the Rhine so that nothing of them remained that could serve as a relic. It was not until after the liberal Baden reforms in the 19th century that the first monument was erected to the two.

In the second half of the 19th century, despite considerable resistance from the Catholic Church, the two were commemorated with the Hussenstein. The Hussenstein has stood since 1863 on the (supposed) spot where Jan Hus and Jerome of Prague were burned as heretics. 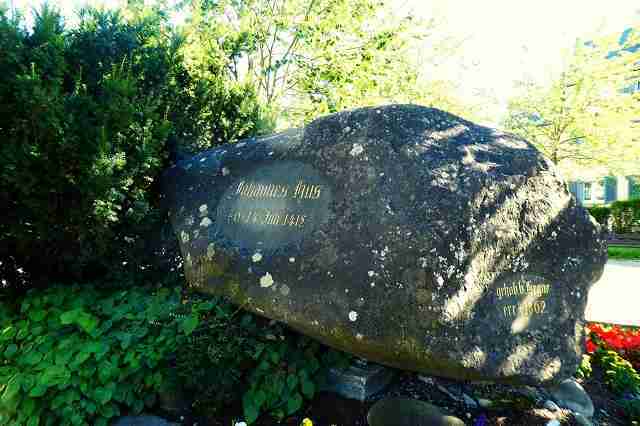 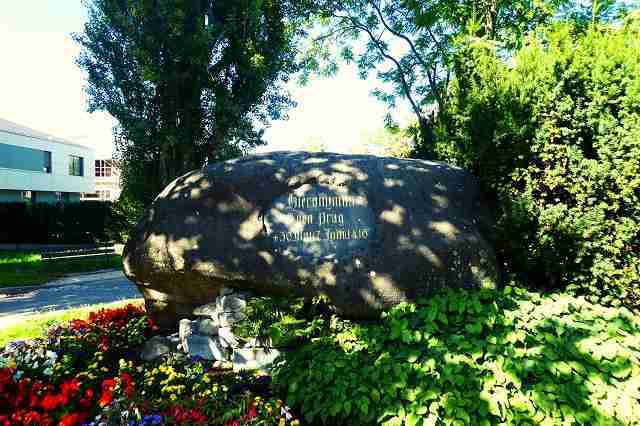 A few years later, a memorial relief to Jan Hus was placed on the present Hus House. There is a similar relief on the successor building to the tower where Jerome of Prague had been imprisoned.
Where. Hussenstraße 64 and Obere Laube 78 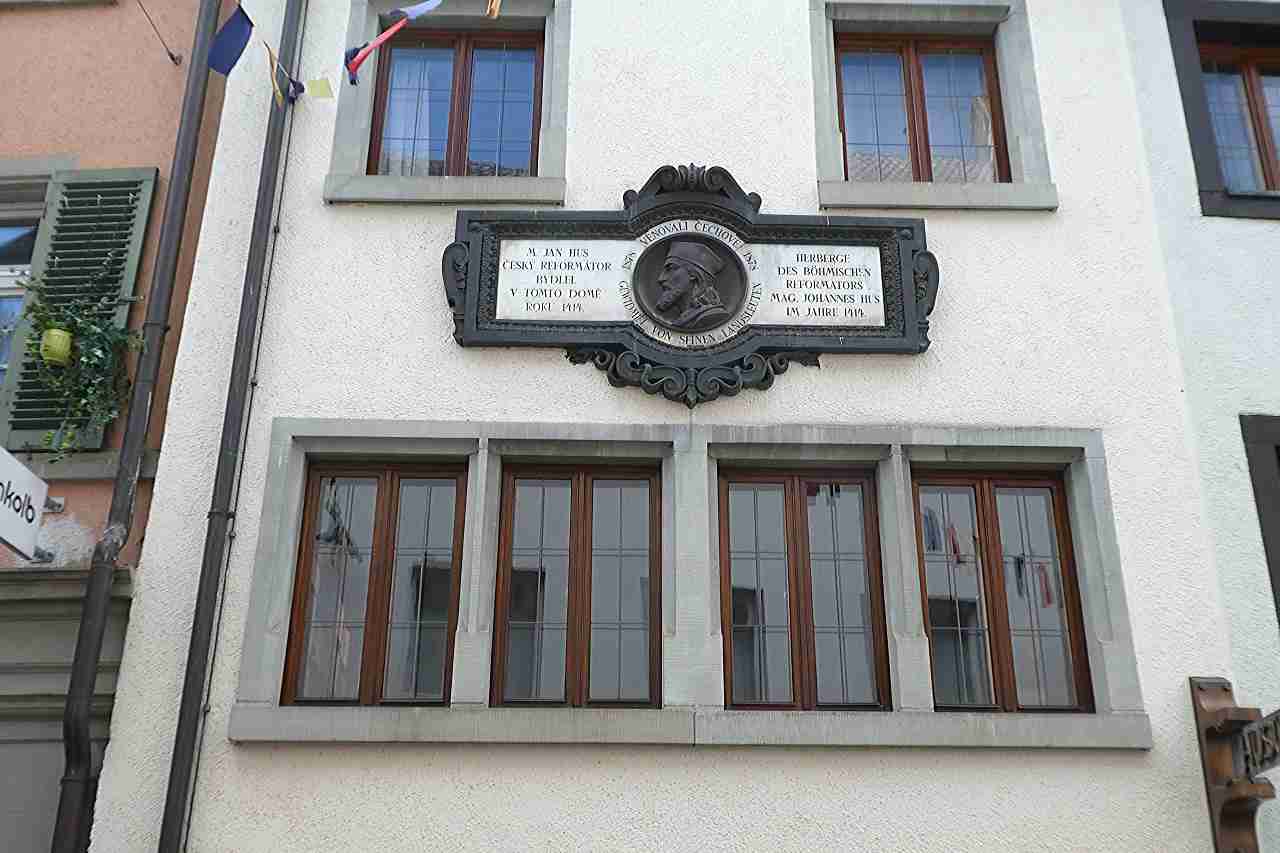 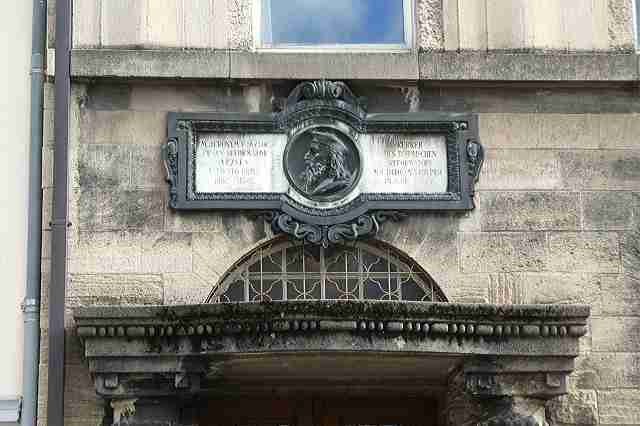 Memorials in the 21st century

On the occasion of the 600th anniversary of Jan Hus’ death, two more monuments to Jan Hus (and Jerome of Prague) were erected in Constance in 2015.

⠀⠀⠀
Also from 2015 is the monument “TRUTH” by artists Jerry Koza, Adam Jirkal and Martin Papcún. When the light falls on the artwork at a certain angle, the word “truth” is projected onto the wall. Jerome of Prague is not honoured here.
Where. On the outside wall of the former Franciscan monastery (now the civic hall) on St. Stephen’s Square. 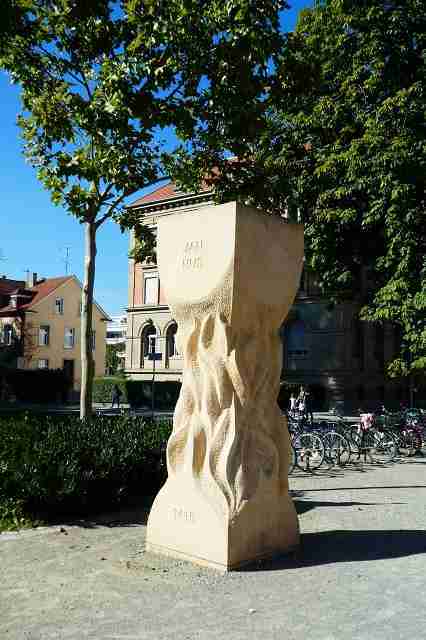 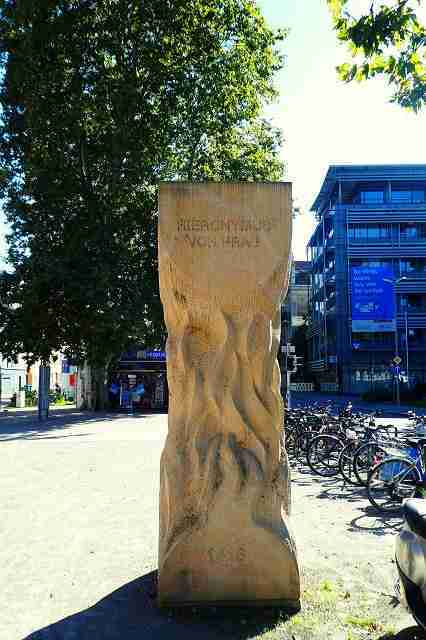 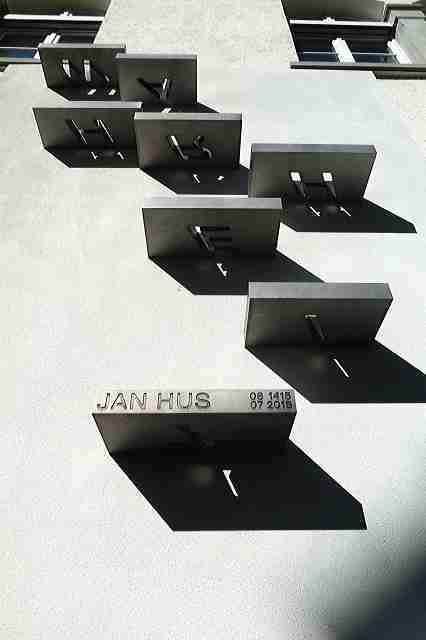 If you enter Constance Cathedral through the main portal, you can see a strange discolouration in the central nave (on the tomb slab of Suffragan Bishop Miller). This is where Hus is said to have stood when his death sentence was pronounced. To some, this discolouration looked like a claw, and so they said that with the heretic Hus, the devil had come into the church and left his mark. Hus’ followers, however, saw the discolouration as a sign from God. In fact, the discolourations are water stains, as water accumulates at the spot after heavy rain.

The Goose and the Swan

You brought a goose, I told him,
over a hundred years, well nemet wol war,
there shall come a snow-white swan,
and you will eat it without roasting.

Jan Hus is said to have spoken these words at the stake. Hus(a) is the Czech word for goose. The swan is supposed to refer to Martin Luther. It is true that the pun on the roasted goose has been handed down from a letter written by Jan Hus from his prison in Constance. However, the story of the goose Hus and the swan Luther probably originated in Luther’s environment, who read Hus’ writings and held him in high esteem. 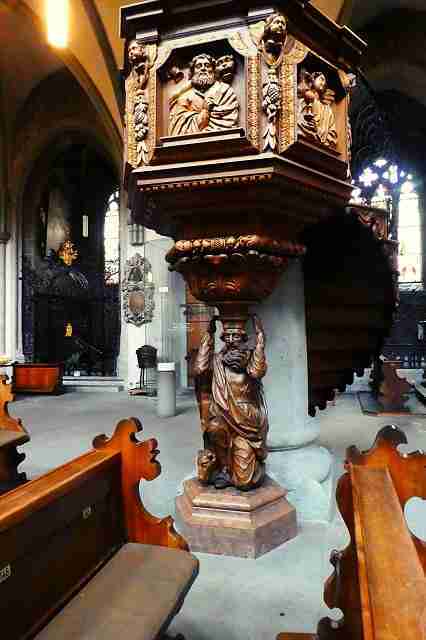 The pulpit in Constance Cathedral was made in 1680. The figure on whose head and hands the pulpit rests represents Abraham. From the first half of the 18th century, however, people thought that the bearer of the pulpit was Jan Hus, who would now have to carry the heavy pulpit forever as atonement for his heresies. The figure was therefore spat upon and a little girl even cut off its nose in 1767! A few years later, Emperor Joseph II visited the city and put an end to the hustle and bustle. In the 19th century, however, Abraham was still exhibited as Jan Hus in the Concilium exhibition in the department stores’ by the lake and was later in the Rosgarten Museum for many years. Since 1984, the figure has been back in its original place under the pulpit.

The Hus House at the Schnetztor belongs to the Hus Museum Society in Prague and is run by the Constance Municipal Museums. Since 1980, it has housed the permanent exhibition on Jan Hus. In 2014, the exhibition was redesigned. Johannes Hus – Courage to Think, Courage to Believe, Courage to Die shows the life, work, death and legacy of the Bohemian reformer. A small but fine museum that you should definitely visit. The museum also regularly hosts small special exhibitions. 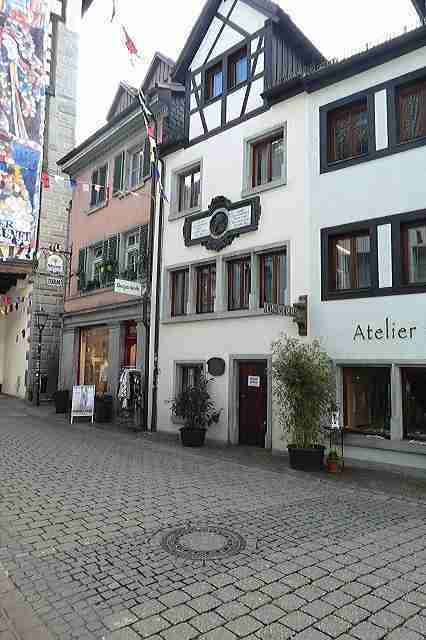 On Jan Hus and Jerome of Prague: 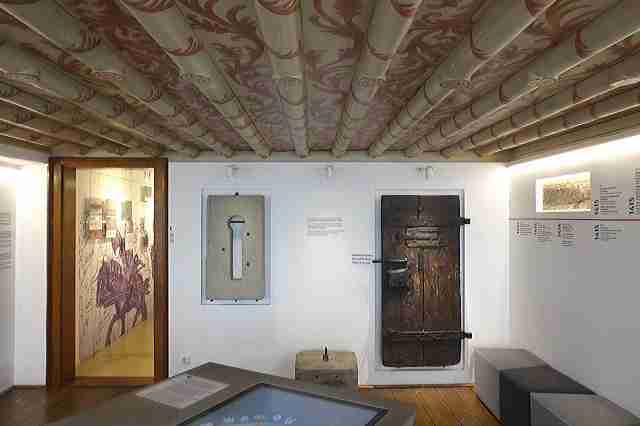 About the Council of Constance:

The original appeared on: Textdestille: Jan Hus und Hieronymus von Prag in Konstanz
Do you always want to be informed about the latest activities?