Johann Sebastian Bach is – I think – known to almost everyone. Therefore, I limit myself here to only a few facts. On the other hand, one is probably a musician or at least a particularly interested concertgoer if one can also do something with the term “musical sacrifice”. However, this will have changed now shortly.

Johann Sebastian Bach was born on 21.3.1685 in Eisenach. I write this so exactly because he became an astronomical Aries only by a hair’s breadth, so to speak. One day earlier in the world – Pisces.

Well, an Aries is considered to be persistent, resilient and assertive, perceptive, visionary, self-confident, impulsive, impatient, reckless and strong-willed.

Pisces are considered rather sensitive and dreamy, intuitive but weak in decision-making, imaginative, mysterious, sensitive, impressionable, mediumistic and charming.

I think it’s hard to imagine a more diverse description of a person. And even if you don’t really believe in zodiac signs and their meaning, you will find that Bach unconditionally corresponded to the cliché “Aries”.

As mentioned, he was born in Eisenach. Already in 1695 he moves to Ohrdruf, both parents had died and he now lives with the older brother. Johann Sebastian learns to play the piano and goes to school. In 1700 we find him in Lüneburg, where he sings in the selection choir of the Michaelis-Schulkantorei.

In 1702 Bach gets his first job in Weimar – unfortunately we don’t know exactly as what. Very shortly thereafter he became organist in Arnstadt, and his first major compositions were written. 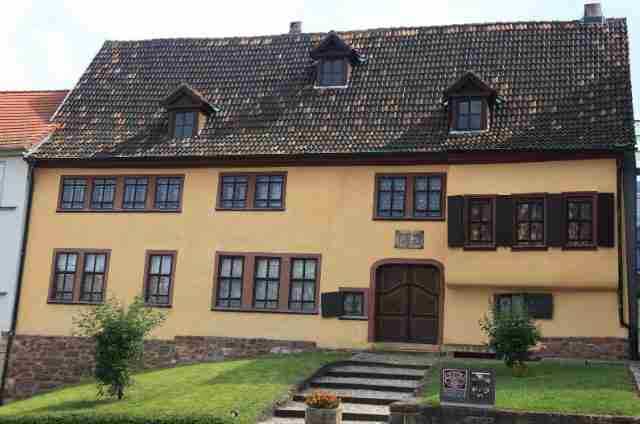 He takes a few weeks off and travels to Lübeck to hear Buxtehude. After his return, he is reprimanded for exceeding his leave and also because the congregation in Arnstadt did not appreciate the amazingly unusual sounds of the young organist Bach. As a result, Bach accepts the position of organist in Mühlhausen/Thuringia, which has just become vacant. Probably six of his cantatas were written there. In 1708 he decides to accept an offer from Weimar, where he will stay for the first time. He earns quite well and already has a great reputation as an organist and composer.

His first wife dies and he marries again. The family grows – Carl Philipp Emanuel is born in 1714. This boy will be important in our history later.

The office of court kapellmeister in Köthen appealed to Bach very much, but unfortunately an amicable separation was not possible in Weimar, so that he was placed under arrest here. After arriving in Köthen in 1717, his œuvre became more secular. He wrote many concertos and suites.

Finally, in 1723, at the age of 38, Bach took over the position of Thomaskantor in Leipzig, where he now lived with his large family. The children grew up and Carl Philipp soon went to Leipzig to study. Actually, it was supposed to be law, but music didn’t let go of him either.

And – long story short – after a few years of wandering, Carl Philipp became a chamber harpsichordist for Frederick II, later Frederick the Great, in Berlin.

There, in May 1747, he receives a visit from his father Johann Sebastian, and Frederick – himself an eloquent musician – proposes a small improvisation contest, as was quite common at the time. One of the themes suggested by the king seemed particularly interesting to Bach senior and he promised to work out this theme not improvisationally, but completely, i.e. in writing and at leisure.

Already in September, the finished Musicalisches Opfer left Leipzig for Potsdam. It was a well-proportioned, ingenious large-scale work consisting of two fugues, ten canons and a trio sonata on the royal theme. Of course, only the unique trio sonata was intended for the courtly concert. The rest – amazing, magical, incredible music theory in notes.

In the four movements of the Triosonata, the old Bach paid homage to the king’s taste in a refined manner. The sensitively designed sound combination of flute, violin and cello flatters the ears and treads thoroughly modern paths.

In the first movement, one hears a quiet dialogue between flute and violin above a steady bass, behind whose notes the royal theme is hidden. Friedrich’s predilection for ornamentation was cleverly incorporated by Bach.

The second movement is a monumental elaboration of the royal theme in triple counterpoint. A fast fugue theme is introduced by the violin, taken up by the flute and joined with counterpoint, then combined with the royal theme in the cello. Later, this appears in the royal instrument (Frederick was a flutist, after all), the flute. I assume that the king was quite impressed and also had to invest some hours of practice.

For the third movement, the exalted, maniacal melodicism of the Berlin court composers of the time was the inspiration. The many sighs and swells seem almost exaggerated. However, the beautiful movement provides the much needed calm before the storm.

For the last movement demands everything from players and listeners. In the form of a gigue, it combines the royal theme with enormous virtuosity and long bows. A truly royal work on a royal theme – the Musical Offering.