Lake Garda – already the approach is a dream

No matter where exactly in Germany or Austria the journey begins – at some stage locations of the not quite 600km long route you have to (or are allowed to) choose between several promising options.

In our case, because we start in the greater Nuremberg area, the following is the first decision of conscience: Do we drive via Garmisch or via Kufstein, i.e. left around Munich or right around? A few years ago, the decision was usually in favor of Garmisch, because our daughter had completed her training as a woodwind instrument maker in nearby Mittenwald, and so we were able to satisfy our longing for her this way even before our vacation. Besides, between Mittenwald and Innsbruck, as an encore so to speak, lies the Zirler Berg with its magnificent view.

At the moment, however, we mostly drive via Rosenheim and then via Kiefersfelden/Kufstein into Austria. On this route one may feel for a long time as a companion of the often turquoise Inn. I find that terrific. 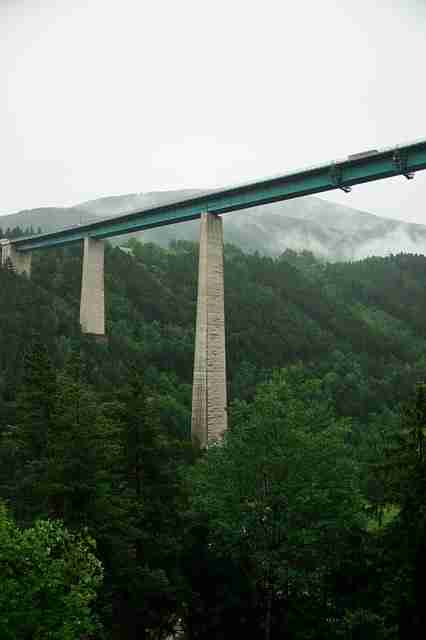 Either way, you finally reach Innsbruck and soon after the Brenner Pass. For many years, we enjoyed stopping here for lunch, because the Gasthof Vetter in Bad Brenner served delicious tris [1]. If you don’t know it, you urgently need to find a Tyrolean inn whose chef has this dish on the menu. It usually consists of spinach dumplings, bacon or cheese dumplings and handmade ravioli, which here are called Schlutzkrapfen. In a luscious puddle of hot butter, generously sprinkled with Parmesan, you have a dish in front of you that won’t leave you hungry until late in the evening. Unfortunately, the Gasthof Vetter is closed and no successor is in sight.

Now you could pay for the highway and then, if no traffic jam intervenes, after just under two hours of driving and 150 km of Italian engineering, you have arrived in Trento, Italy, the city of the Council of 1545. A truly spectacular highlight in the upper Italian countryside en route is the monastery of Säben, perched above the ancient town of Klausen [2]. It can be easily seen from the highway running at a lofty height, at least for the co-driver. It is worth climbing up the steps from the old town center in the Eisack Valley. Suddenly you are in a completely different world and in the lush and extremely unusual painting of the Church of the Holy Cross, which is only one of three churches, you feel as if you are in heaven.

Another option would be to take the country road, which mostly runs parallel to or below the highway. This way you pass through many pretty towns and cities such as Gossensass, Sterzing, Neustift, Brixen, Klausen, Bozen, Neumarkt and Sankt Michael. I have already taken the precaution of putting on the rose-colored glasses I mentioned in the opening chapter, because of course there are also industrial areas, unattractive suburbs and aberrations of taste in Italy, as almost everywhere else in the world. However, they are just on our way to Lake Garda and I am extraordinarily generous in this respect. If then the cashier in the really ugly Supermercato also speaks to me in Italian, in order to be pleased then about my answer, as only Italians can – at the latest then the vacation began.

Also on the country road one reaches Trento after naturally clearly longer travel, drinks on the wonderful Piazza del Duomo a Cappuccino and must decide already again between two equally inviting routes.

The first option: from Trento in a westerly direction, via the Sarca Valley to Riva.

Immediately after the turnoff, it becomes clear what one has let oneself in for with this routing: Up you go into the mountains. But once you’ve made it and plunged into the descent on the other side at Vezzano, you’re rewarded with the rocky wilderness of the Marocche. One is not surprised that this valley was still impassable until the 19th century, because a tremendous landslide took place here after the glaciers of the last ice age had slowly retreated. The stone masses cover far more than 10 km² and form this futuristic landscape, in which several small lakes are hidden. Finally, you pass the extremely romantic Castel Toblino, situated on one of these lakes, and wonder who is lucky enough to live here. The building is privately owned, but there is the tempting opportunity to have a cafe or maybe even a Campari soda on the terrace of the small restaurant – after all, only one person has to drive the car. 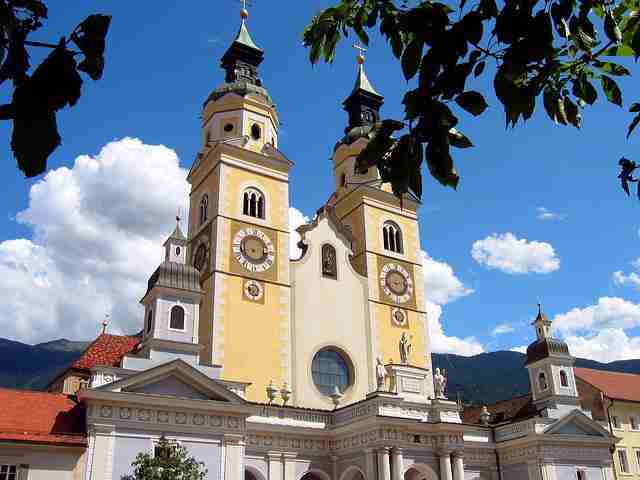 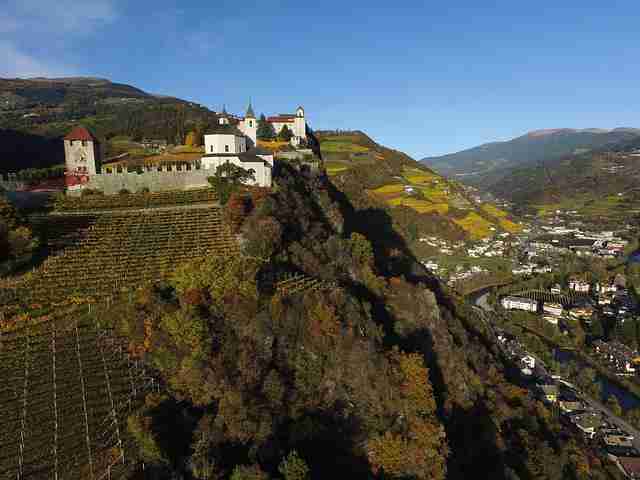 After this rest, the narrow road winds along the river, passes Sarche and Pietramurata, to finally pass below the ruins of the castle of Drena through an almost archaic landscape. About here the three (!) roads that have been cut through the Marocche in our days unite. One can imagine that not the biggest one is the most beautiful. We usually prefer the middle one, the one that passes by Lago di Cavedine. Every time we are surprised how quiet it is here, because tourism floods a little further west on the largest road past this light blue jewel.

It’s not far now to Arco, the little town that already captivated Dürer and to which a few extra lines will soon be dedicated here.

From here, we finally pass – after trying the rose-colored glasses again – the tiny church of San Tommaso, which was once completely painted and lies somewhat despondent on the side of the road. The little church is a prime example of the Romanesque country churches of northern Italy and has all that one expects from such a church: a shapely round apse, a slender campanile with a brick helmet and pretty biforms [3] and, as befits the Romanesque period, barely windowed walls. This is the Busa, a very fertile plain that was covered by the waters of Lake Garda for a long time.

Soon we have reached Riva – either through the new tunnel, in which case we are spat out just before the lake, or along the old country road that takes us through the town. Riva is a pearl with an eventful history. More about this soon … 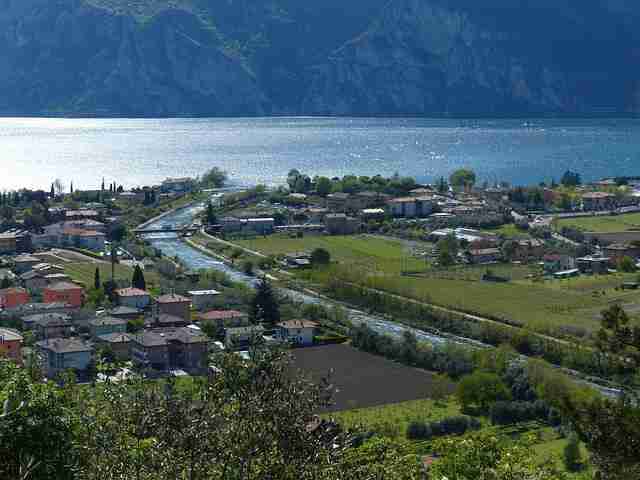 Not here in Riva on the western side of the northern tip of Lake Garda you arrive, but in Torbole on the eastern, you have chosen the other, the second, way in Trento.

On this route you leave the highway or the road only further south at Rovereto. You follow the signpost with the seductive inscription “Lago di Garda” and reach Mori, passing the silted up Lago di Loppio, which was the scene of one of the most unimaginable ship transports in history. You can already guess – there is a longer story brewing, which would lead too far here, because finally we want to arrive.

Nago still has to be crossed, the old town with its winding alleys. Usually, the streams of tourists simply rush (or jam) through, because the destination is so close. But we take a quick look at the church of San Vigilio, newly built in the 16th century and unfortunately rather charmless, but laudably connected to the old bell tower. And this one has really pretty biforms, a spire rather unusual for here, and a Romanesque relief.

Now we are drawn further and we finally reach the small parking lot where probably Goethe already stood when he reached the lake via Nago in September 1786. A unique panorama lies before us. Our gaze wanders over the northern part of the lake, which still lies between high rock walls, and is attracted by the hazy brightness in the much wider, more extensive south. It continues to sweep over Monte Brione, which looks like a sinking ship right between Torbole and Riva, and over the mouth of the Sarca River, which does not seem wildly romantic at all.

But that was once different. In our days the water of the main Garda tributary is taken by the Italian electricity company; but in the past the Sarca was a wild river that created the unique Sarca Valley from the Adamello Group to Lake Garda. Today, seeing the huge scree of the riverbed, one is quite surprised by the tiny trickle of water that the Sarca River only has at its disposal for most of the year. The lateral rock walls of the valley, particularly impressive at Arco, are polished as smooth as glass – a result of thousands of years of bedload from the huge quantities of glaciers. 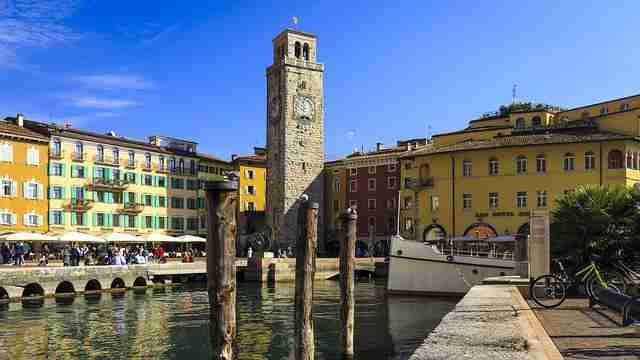 A few more turns of the road and we have arrived in Torbole. This little place has always been known for the stiff breeze that blows here. The connoisseur in the form of my husband speaks of the “nozzle of Torbole”.

While in Roman times only the hot springs in Sirmione, in the south of the lake, were a reason to come into contact with the water voluntarily, since the invention of the surfboard the north has become the Eldorado of water sports enthusiasts.

Everywhere they can be found, the wind hungry. On every free spot they wait for the Pelèr [4] in the morning and the Ora [5] in the afternoon, almost every car has a roof rack with a board lashed to it, everywhere the colorful sails flutter and rattle, set up to dry in many corners.

3 … A window divided into two parts by an adjusted column.

With chapters on “French composers of the classical period”, Ravel’s Boléro or the Marseillaise. Stories about “Reims and the Rosettes of the Cathedral”, Mont Saint Michel or Brittany. 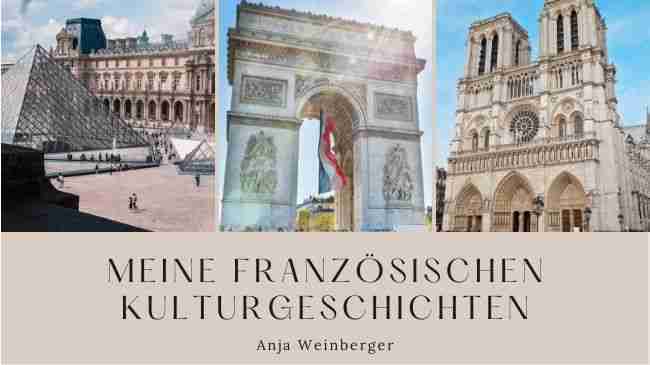 The book
Do you always want to be informed about the latest activities? 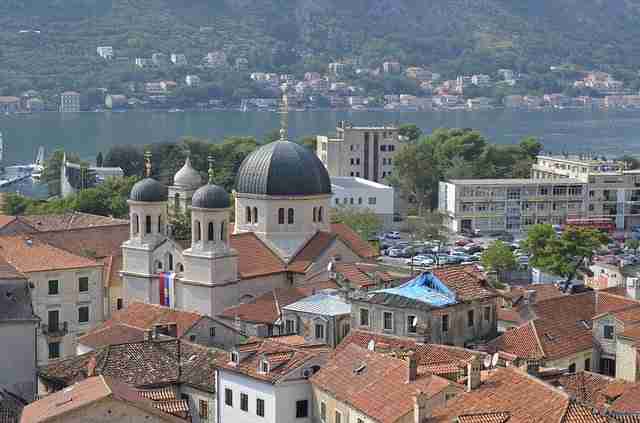