“Maria Gloriosa” – The Voice of Erfurt

In the central tower of Erfurt Cathedral, which since 1994 has once again been the cathedral of the reestablished Roman Catholic Diocese of Erfurt, hangs a true wonder of the world. The largest free-swinging medieval bell in the world. For many citizens of Erfurt, the sound of the great cathedral bell and its deep keynote “E” are associated with many emotions. This is due in no small part to its eventful history, which is briefly described in this article.

Today’s large bell of the cathedral, which bears the name “Maria Gloriosa” – usually simply called “Gloriosa” – was cast in June 1497 by Gerhard van Wou from Kampen.

As early as 1251, a large bell was cast for today’s Erfurt Cathedral, then still the collegiate church of St. Mary, with the name “Gloriosa”. After a good half century, this became unusable and for this reason a new “Gloriosa” was cast in 1307 or 1308. This in turn had to be recast as early as 1363. In 1416 the towers of St. Mary’s Church burned, and the fire also destroyed all the bells. After this fire, it was not until 1423 that new bells could be cast and thus also the fourth large bell with the name “Gloriosa” for today’s cathedral.

On June 19, 1472, Erfurt experienced the largest city fire in its history, which reduced large parts of the city, consisting mainly of half-timbered houses, to rubble. Public buildings and numerous churches were also affected, including again St. Mary’s Church with its “Gloriosa”, which melted during the fire. As a result, in 1477 Master Klaus von Mühlhausen was entrusted with the casting of a new large bell, which, however, again became unusable only two years later due to a crack (1479).

As a result, starting in 1495, preparations began for the casting of the current, the sixth large bell of the name “Gloriosa”. In the summer of 1497, the time had come. Gerhard van Wou arrived in Erfurt to cast other bells in addition to the new large bell, including the large “Vincencia” for the Severi Church. For this purpose, he and his employees built the appropriate facilities directly on the churchyard between St. Mary’s Church (now the Cathedral) and St. Severi’s Church on the Domberg. On July 7, 1497, at 1 p.m., the furnace was fired up and by 10 p.m. the bell was ready to be cast. Now the ceremonial act began. The canons of the then collegiate chapter of St. Mary’s now went in solemn procession with flags, candles, torches and a monstrance containing a consecrated host to the cathedral courtyard and celebrated a church service, as is still customary today when bells are cast. 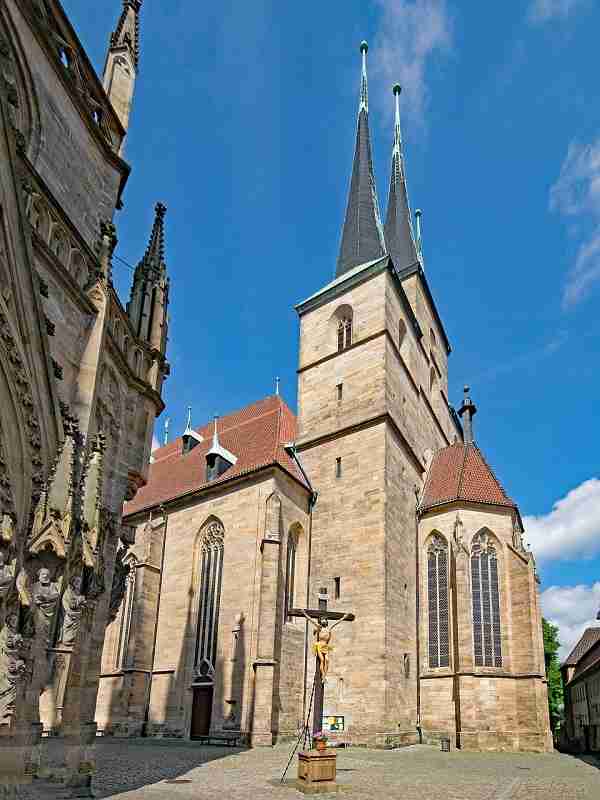 On July 8, at 1 o’clock in the morning, the furnace could be tapped and at 2 o’clock the casting of the “Gloriosa” was completed and successful. Then, according to the sources, the canons solemnly sang the “Te Deum laudamus”. The night ceremony by torchlight and candlelight, accompanied by Gregorian chant, must undoubtedly have been an impressive sight.

The bell was consecrated on August 16, 1498, by the auxiliary bishop of Mainz, Johannes Bonemilch Laasphe, who resided in Erfurt. Laasphe had been strongly committed to the casting of the new “Gloriosa” and has remained in Erfurt’s memory not only because of this, but also because in 1507 he ordained the Augustinian monk Martin Luther to the priesthood in the Kilians Chapel of Erfurt Cathedral (without, of course, being able to guess his future significance).

On May 19, 1499, the “queen of bells” rang for the first time in her parlor in the middle tower of the cathedral. At that time, its full sound could be heard up to 20 km away in the surrounding area of Erfurt. This was preceded by a complex installation under the conditions and technical possibilities of the late Middle Ages. Before the bell was installed, the mezzanine floors of the tower were broken through and the bell was then lifted into the belfry with the help of a wooden pulling device inside the tower. Afterwards, the tower floors were retracted and provided with massive vaults. Preserved invoices bear witness to these construction measures.

When the cathedral towers burned again in 1717, the “Gloriosa” was, almost miraculously, not damaged. Probably the massive vaults, built in 1499, were responsible for the fact that the fire could not reach the bell. After the fire, the towers were provisionally restored.

However, lasting damage to the bell occurred due to errors in the treatment of the bell in the late 19th and early 20th centuries. In 1899, the bell was turned 90 degrees, ironically, on the grounds of wanting to preserve the bell. Bell founders warned in vain against this step. In 1927, a much too large clapper was additionally installed, which now hammered against the bell with three times its original weight. If one wanted to improve the sound of the bell with this measure, one destroyed it with it. On Christmas Eve 1984, a crack was noticed in the almost 500-year-old bell, which was elaborately repaired on site in the belfry in 1985 by the Nördlingen company Hans Lachmayer.

However, just 18 years later, due to material fatigue, a new hairline crack appeared on the bell, which could not be repaired on site.

The bell was removed in a complex procedure, the outer wall of the central tower was broken through, the bell was lifted down with the help of a crane, loaded and taken to Nördlingen, where it was successfully restored. After repair in Nördlingen, it was reinstalled in September 2004. On December 8, 2004 (Feast of the Immaculate Conception) the “Gloriosa” rang again for the first time since the repair.

For reasons of conservation, the bell is only rung on church feasts, Marian feasts and selected occasions. The dates are determined and announced in an annually updated ringing schedule. Those who not only want to hear the bell, but also see it, can experience this today within the framework of tower tours, which are regularly offered by the Dominformation.  Weighing about 11.5 tons, with a diameter of 2.50 m and a height of 2.62 m, it impresses not only acoustically but also visually. 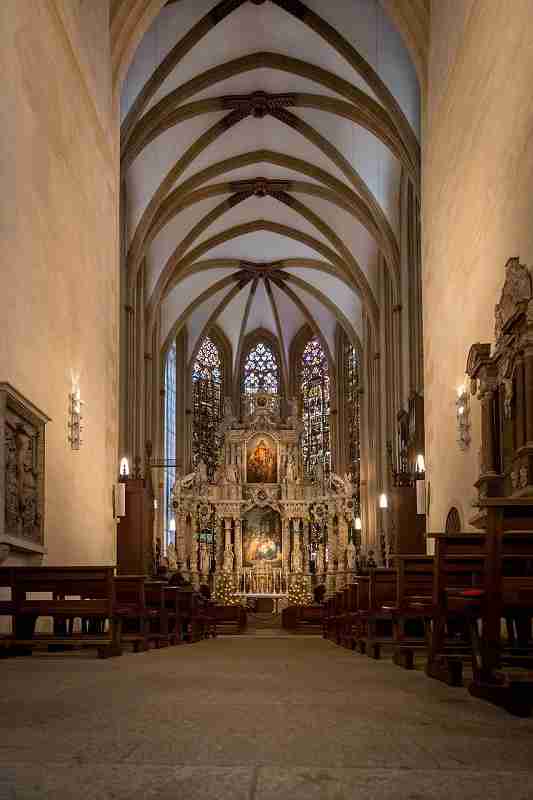 From the folklore point of view, the history of the “Gloriosa” also had an effect on the creation of legends. Since the predecessors of today’s bell were not granted a long life, the legend arose that the devil conspired against the bell. However, as is usual with legends, the underlying facts are only partially correct. For example, the lifetimes of the predecessor bells were not always exactly 56 years long, as the “Legend of the Erfurt Gloriosa” tells us. Moreover, rational causes were always responsible for the destruction or unusability of the bells. Nevertheless, this legend formation bears witness to the fascination that the “voice of Erfurt” has always exerted on people.

This meaning of the “Gloriosa”, which is to be sought on the emotional rather than the rational level, also seems to be the reason why people in Erfurt – a city in which the majority of the population today no longer professes the Christian faith of one of the two large churches and in which Catholics are a small minority – nevertheless feel so attached to this bell. When the bell was in need of rescue, not only Christians but people from all walks of life and world views donated and hoped for rescue of THEIR “Gloriosa”. The Gloriosa seems to be a “part of the soul of Erfurt”. Just like the silhouette of the cathedral and Severi, it is a sign of home and creates a sense of belonging, similar to what can be observed in relation to the cathedral in Cologne, the main church St. Michaelis in Hamburg and the Frauenkirche in Dresden.