Salem is certainly known by name to most people because of the famous boarding school, which is located on a former monastery site. Salem is located in the Linzgau region about 9 kilometres east of Überlingen and about 10 kilometres northeast of Meersburg. The former Cistercian Abbey of Salem, today called Salem Monastery and Castle, is very interesting from a historical and art-historical point of view, and I would like to introduce you to its history and sights on a tour of the complex.

History of the Cistercian Abbey of Salem

The beginnings of the monastery

In 1134, Guntram von Adelsreute donated part of his property to the Cistercian Order to establish a monastery, into which the first monks moved in 1137. The monastery became an abbey in 1138 and was elevated to the status of an imperial abbey by King Konrad III as early as 1142. A few years later, Salem Monastery was also able to secure access to the lake by acquiring the Maurach estate on the shores of Lake Constance, which facilitated and promoted trade in agricultural goods. Through further endowments and donations, the monastery came into possession of large estates and properties in the following century. Several daughter monasteries were founded (e.g. Wettingen near Baden in Switzerland and Königsbronn in the Swabian Alb). In the 14th century Salem was one of the richest monasteries in southwest Germany and had so-called town courts in many towns (e.g. in Constance, Überlingen and Esslingen).

Salem in the Thirty Years’ War

Salem had already been repeatedly plundered and occupied in the wars of the 16th century. And in the Thirty Years’ War, too, the monastery was repeatedly occupied and pillaged by imperial and Swedish troops. Several times the abbot even had to flee with the monks to Constance and in 1641 he finally dissolved the convent. It was not until 1647 that the Cistercians were able to return to Salem Monastery, which was heavily in debt at the time.

In 1697, a fire caused by an overheated oven destroyed almost the entire monastery. Only the medieval minster survived the fire. In the following years, the monastery buildings had to be rebuilt. Magnificent baroque buildings were erected, the rooms of which were decorated by famous artists. In the 18th century, the monastery prospered and once again attained wealth and prosperity.

From Salem Monastery to Salem Castle

In 1802, the Margraves of Baden came into possession of the two imperial abbeys of Salem and Petershausen (Constance) as a result of the Imperial Deputation. By 1806, they had received further territories from Vorderösterreich and were elevated to the status of grand dukes. In 1804 the Salem convent was abolished and the monks and the abbot had to leave the monastery. At least they received a pension and the abbot a new residence at Kirchberg Castle near Immenstaad. In the following century, various members of the House of Baden used the monastery, now called the castle, as a summer residence or also as a permanent home. For example, Margrave Wilhelm (1792-1859), Grand Duke Friedrich (1826-1907), who acquired the island of Mainau in 1853, his brother Wilhelm (1829-1897) and Prince Max von Baden (1867-1929), the last Chancellor of the German Empire.

The two educators Kurt Hahn and Karl Reinhardt founded Schule Schloss Salem in 1920 together with Max von Baden. All three were close to reform pedagogy and, under the impressions of the First World War, they had the goal of “an education for responsibility”. With 650 boarding places, Schule Schloss Salem is the largest boarding school in Germany. The school’s premises, classrooms and living quarters are spread over the entire monastery grounds and are located in the castle, the rent office and the monastery tithe barn, among other places.

There is a lot to see on the tour of the monastery grounds. Right at the beginning you pass through the courtyard garden, where the monks used to grow herbs and vegetables. Besides the prelature and the minster, there is a historic smithy, a torkel, a horse stable and an old prison that is now a wine tavern. There are also some shops and workshops for handicrafts on the grounds. There is also a distillery and fire brigade museum, a café and a playground. If you want to see everything in detail, you should bring enough time with you. In the following, I will show you the Minster, the Prelature, the Monastery Museum, the Library and the Imperial Hall. 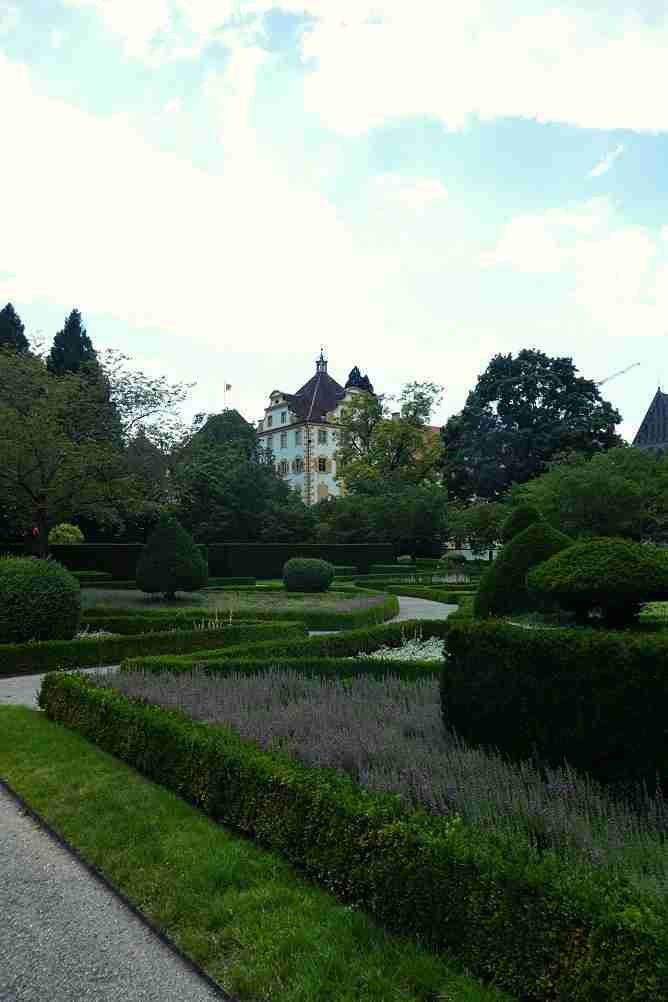 The Gothic cathedral survived the fire that destroyed almost the entire monastery in 1697 relatively unscathed. The Cistercians began building the church around 1285. It was consecrated in 1414, but the cathedral was not completed at that time and was only finished in the following decades.

The interior of the cathedral has early classicist furnishings and a sculpture programme made of alabaster. The sculptures and the alabaster altars, which were produced in the course of the 1770s and 1780s, were made by Johann Georg Dirr (1723-1779) and Johann Georg Wieland (1742-1802), who had taken over the workshop of Joseph Anton Feuchtmayer (1696-1770) in neighbouring Mimmenhausen. The walnut choir stalls are still by Feuchtmayer. In the course of the classicist redesign, the cathedral also received a new four-part organ. Today, however, only the facade of the Trinity organ on the west gallery remains. 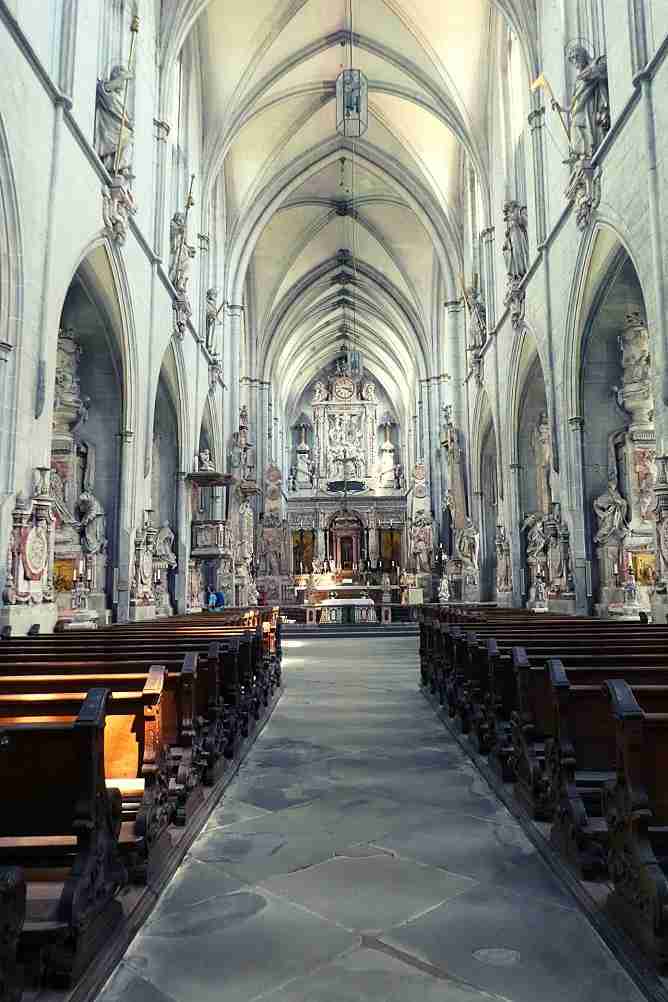 On the two eastern crossing pillars of the cathedral, on the right and left at the entrance to the choir, are sculptures of the two most important saints of the Cistercian order: St Benedict of Nursia and St Bernard of Clairvaux. At the base of the statue of Bernhard von Clairvaux (c. 1090-1153) you can see the Salem honey licker, which refers to the nickname “honey-flowing scholar” that Bernhard von Clairvaux bore because of his eloquence. In the pilgrimage church of Birnau, too, there is a honey licker on the right-hand side altar – dedicated to Bernard of Clairvaux. Bernhard is also the patron saint of beekeepers and bees, among others. 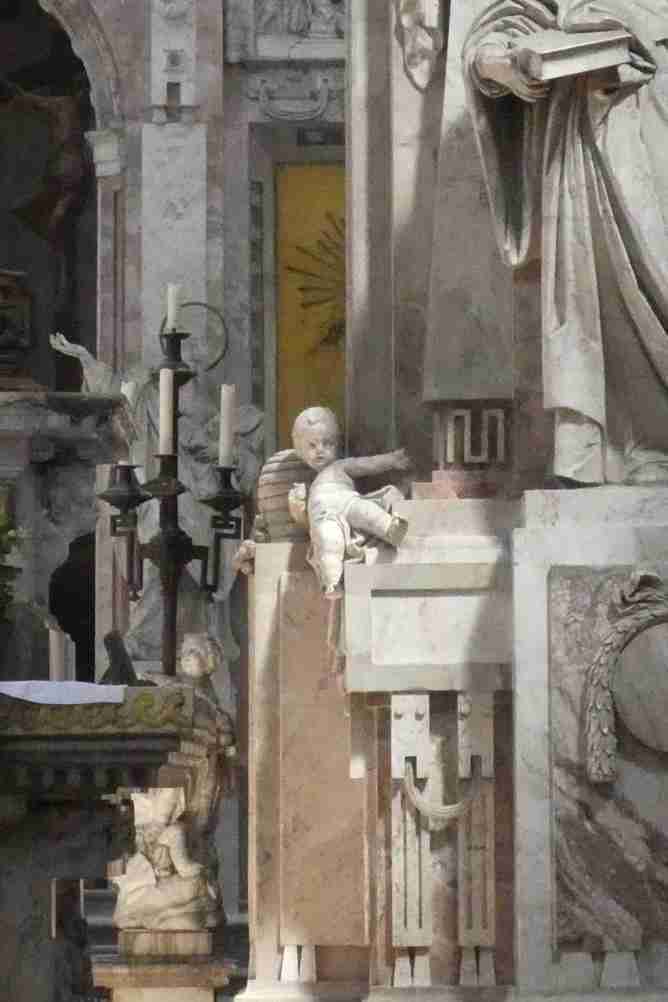 After the great fire, new buildings were erected until 1709, which included not only the prelacy, with the abbots’ representation and living quarters, but also the rooms of the convent. Two baroque four-winged complexes were built, connected in the south by a pavilion. Later, the prelacy was also the residence of the respective owners of the House of Baden. Today, various rooms of the prelacy can be visited and the monastery museum is also located here. The students of Schule Schloss Salem now live in the former convent buildings where the monks used to live. 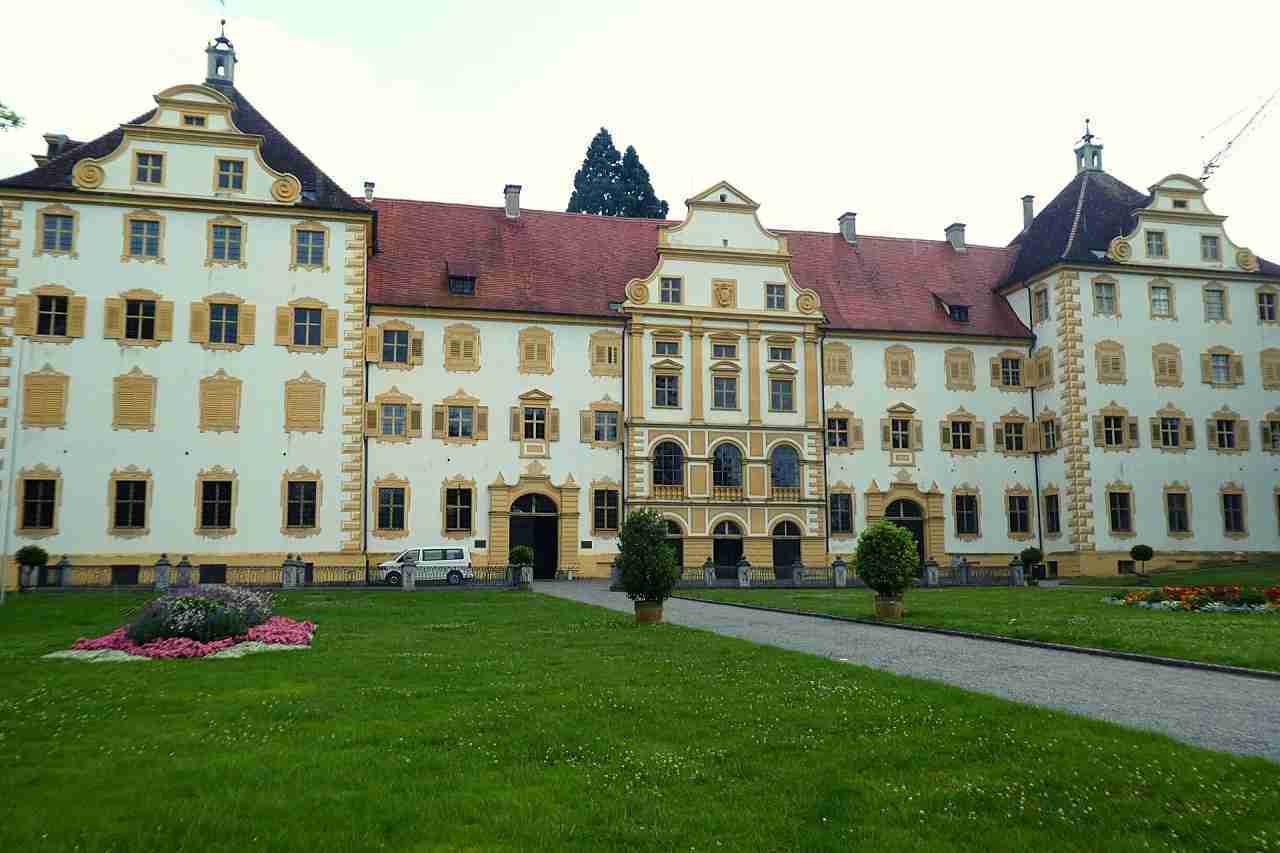 In the monastery museum on the ground floor of the prelature, you can learn a lot of interesting facts about Cistercian water management, fire protection and the history of the monastery on an area of about 260 square metres. A virtual screen model shows the structural changes to the complex since the Middle Ages. Since 2014, a branch museum of the Baden State Museum has been located in Salem with Masterpieces of the Imperial Abbey. Important works of art from Salem since the Middle Ages are on display here. The highlight of the exhibition is the Salem Altarpiece of the Virgin Mary by Bernhard Strigel (c. 1460-1528), created at the beginning of the 16th century.  I also find the wooden sculptures created around 1735 by Joseph Anton Feuchtmayer for the Marstall (horse stable) beautiful. 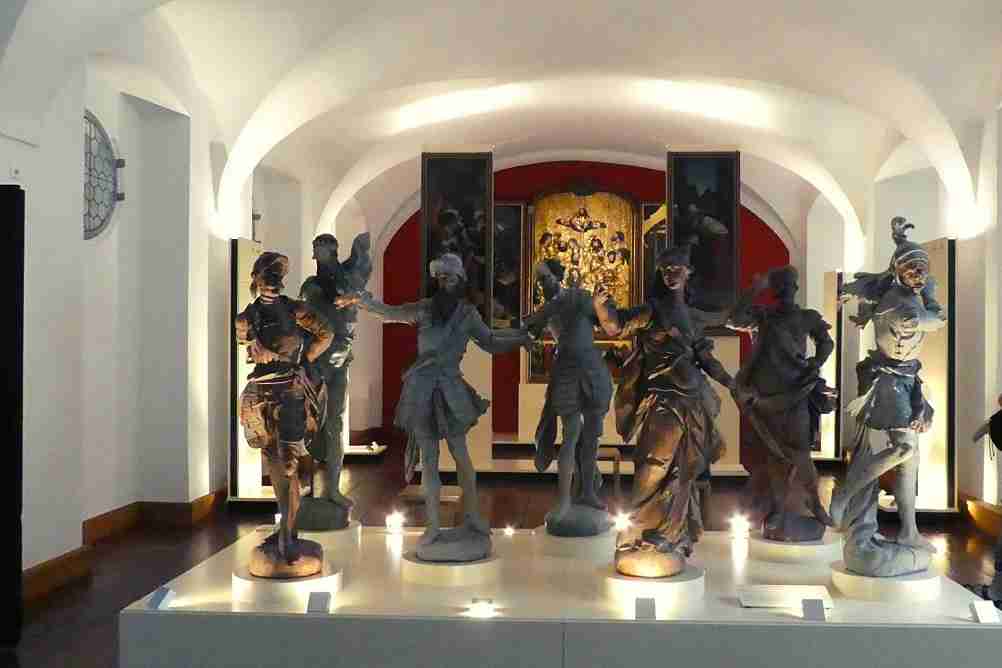 The library of Salem Monastery comprised writings from the Middle Ages to the 18th century. From the early 18th century, the library was located in the west wing of the newly built prelacy and at the end of the 18th century the hall was redesigned in a classical style. A few years after the secularisation of the monastery, the Grand Duke of Baden Ludwig I sold the complete holdings of the library to the University of Heidelberg, where they are still located today. 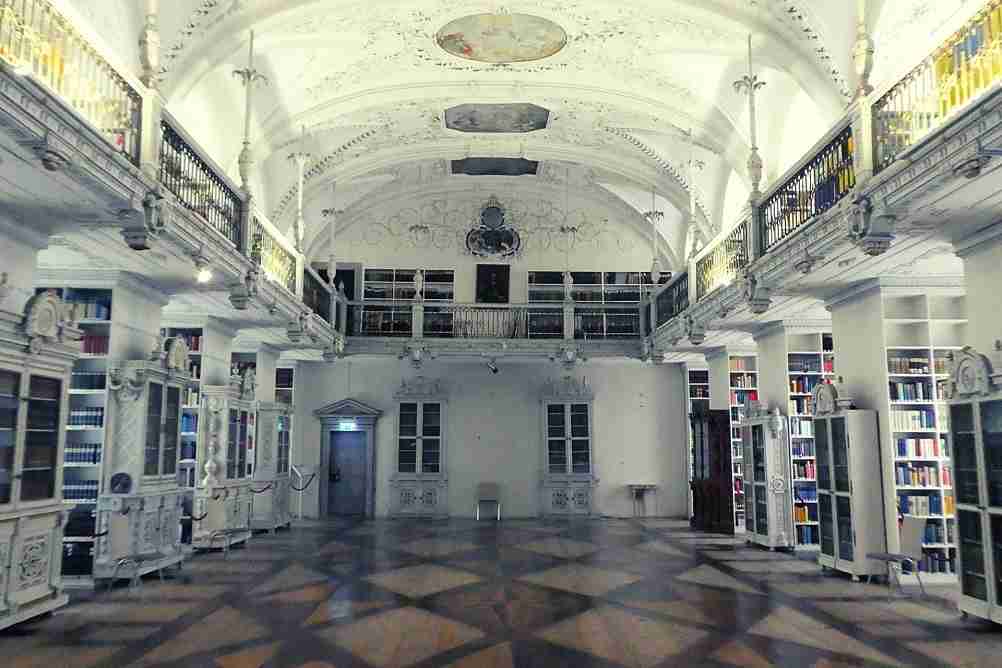 The Emperor’s Hall is located on the second floor of the Prelature and is lit from two sides by windows. It served the abbots as a representative banqueting hall. 16 larger-than-life statues of emperors can be seen in the hall. Biblical scenes are depicted on the ceiling paintings. The stucco decoration is by Franz Joseph Feuchtmayer (1660-1718).

1134: Guntram von Adelsreute donates land for the foundation of the monastery
1142: Salem Monastery becomes an imperial abbey
1155: The monastery acquires the Maurach estate on Lake Constance
1641: The convent is dissolved during the Thirty Years’ War
1647: The monks return to Salem
1697: Large parts of the monastery are destroyed by fire
1709: Reconstruction of the prelature and convent buildings is completed
Around 1770: Start of the redesign of the cathedral
1802: The abbey becomes the property of Baden
1804: The convent is dissolved
1920: The Salem Castle School is founded
2009: The state of Baden-Württemberg buys Salem Abbey and Castle 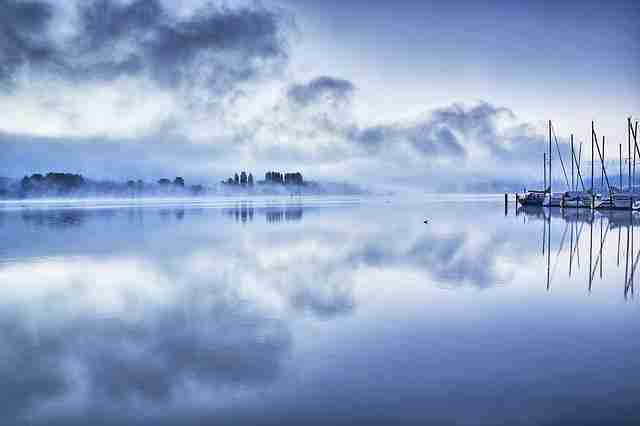