The battle on the Lechfeld of 955

The battle on the Lechfeld of 955

A historical event between narrative education and politics of history

Tales and legends are created by the extraordinary, no matter whether they refer to a person, an event or a local circumstance. The Battle of the Lechfeld south of Augsburg in 955 combines all these aspects in an almost exemplary manner.

In the 10th century, the Lechfeld and the city of Augsburg had a special geographical significance for Central Europe and Eastern France. The Lechfeld has been an important traffic junction of the foothills of the Alps since ancient times. The importance of the area also lay in its scarcely populated and dry plain, which favoured the accumulation of armies. Furthermore, the so-called Gunzenlé hill, a famous early medieval dinghy, was located near the Lechfeld.

The bishop’s city of Augsburg, located about ten kilometres further north, was a double border town in the 10th century – not only between the cultural regions of Bavaria and Alamannias, but also on the edge between the ‘Christian world’ of Central Europe and the ‘pagan world’ in the east.

The ‘Hungarian storms’ that began in 899 led to decades of war between the Eastern France and the Magyar riders. These tenth-century incursions are not only handed down in writing, but can also be perfectly proven archaeologically. Nevertheless, their climax and end point, the Battle of the Lechfeld of 955, is a special case: The term Lechfeld Battle refers strictly speaking to smaller skirmishes lasting several days as well as a subsequent pursuit of the fleeing Magyars – i.e. a distribution of the fighting on numerous smaller battlefields.

While the exact locations cannot be scientifically proven to this day, the course of the fighting is handed down in even greater detail. The initiative of Uodalrîh, or in German Ulrichs, the then Bishop of Augsburg, to massively expand the city’s fortifications due to the constant threat is considered an important prerequisite for victory. The Magyars probably gathered at the Gunzenlé in 955 and besieged Augsburg, which was able to successfully hold its ground under Bishop Ulrich until the East Frankish troops under King Otto approached from the west.

The East Frankish soldiers gained the upper hand in the course of the battle on August 10th and armoured cavalry pushed the fleeing Hungarians. Contemporary historiography quickly glorified King Otto as an honourable, Christian victor and did not mention the forced slaughter of the fleeing Magyars – whose leader Bulcsu was at least officially and nominally also a Christian. The historical achievement and thus the historiography constituted a strong argument legitimizing the rule in the 10th century. It was in the interest of the rulers not to leave the presentation of the successes to oral tradition. This coiffed image of Otto the Great still exists in part to the present day and is still the subject of cultural and historical discourse.

The Battle of Lechfeld is considered the conclusion of decades of conflict. The victory over the Hungarians had a stabilizing effect on the German duchies and the East Swabian area around Augsburg. For the time being, the particular division of the German tribes and their nobility was over. After 955, King Otto had ensured not only internal but also external peace, which brought about a political, economic and cultural upswing for Central Europe. 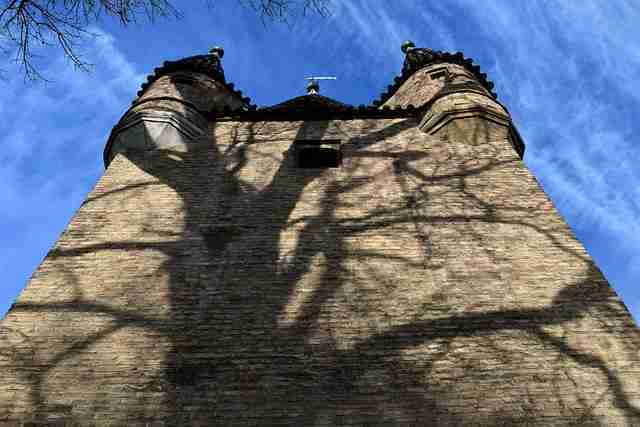 The battle initiated the orientation of the Magyars towards the Western Occident, less than 50 years later Stephen I. was proclaimed the first Christian king of Hungary.

By restoring order in the empire, Otto established his claim to the title of emperor and initiated the transformation of the Eastern Frankish Empire into the Holy Roman Empire. The victory over the Hungarians was generally regarded by his contemporaries as the decisive event and greatest achievement of his life.

According to the historian Charles Bowlus, King Otto freed Europe from the need to maintain costly infrastructures against Eastern invasions and migratory movements, which only allowed the dominance of Latin-Western Christianity to develop. Only this made three centuries of uninterrupted economic growth and geographical expansion possible. The relevance of the Battle of Lechfeld is thus undisputed from a historical perspective, even in the 21st century.

All the more reason to ask how the event is anchored both in Augsburg’s cityscape and in the cultural consciousness of Bavarian Swabia – in the past and present.

In summary, the Battle of Lechfeld in 955 can be regarded as an event in which world history and the creation of legends come together and which shaped the individual development of the city of Augsburg as well as the history of Europe. According to the theses of some historians, the global political and epoch-making event near Augsburg, like the heroic Ulrich, was soon surrounded by popular tales from the Middle Ages onwards and developed into an identity-forming element. 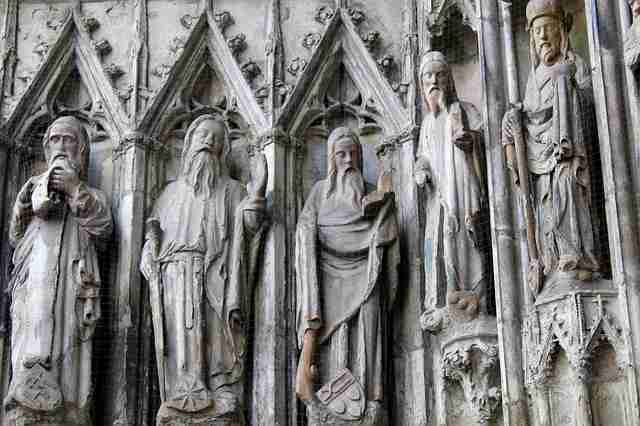 Reminiscences of the historical event of the Battle of Lechfeld and of the bishop, saint and diocesan patron Ulrich can be found in all epochs. The religious cult of relics around the saint Ulrich was booming. Already in the Middle Ages protective Ulrich keys were made as necklaces and there were health-promoting Ulrich chalices and Ulrich springs.
The bestseller Ulrichserde, soil that came into contact with the grave of the saint, enjoyed particular popularity and was supposed to help against vermin in the fields.

The monastery church of St. Ulrich and Afra developed a rich cult history with a pilgrimage system that lasted for centuries. Books of miracles were continued into the 18th century, which attributed miracles to St. Ulrich, among others. The Vita Sancti Udalrici, the miracle reports, later legends and pious tales were the basis for the numerous functions of the saint, covering universal themes such as health, clean water and sufficient food. Ulrich was considered the patron saint of winegrowers and travellers, of weather and water, as well as the patron saint against vermin such as rats and spiritual leaders.

In literary revisions about Ulrich from the Middle Ages until the 20th century, no value was ever placed on poetry, drama or historicity. The focus was always on the example of the pastor and mediator between people in need and a helping God. Over the centuries the veneration of St. Ulrich was not only reflected in numerous literary revisions or celebrations and anniversaries. Until the 20th century, Bishop Ulrich repeatedly became the subject of musical works – mostly of a church nature – but also of profane theatre productions.

In early humanism, the components of traditional worship of the Ulrich were combined with the eminently political objectives of the so-called “Reich Idea” and thereby developed a complex pictorial world, which can also be seen in public spaces from the 16th century onwards – for example in corresponding early modern façade paintings on the Weaver’s House in Augsburg or Barfüßertor. Even a thousand years later, the battle was still a popular pictorial subject on representative buildings in the imperial city of Augsburg.
In the enlightened 19th century and through the affiliation of Bavarian-Swabia to the Kingdom of Bavaria, a new historical-political course was set, which on the one hand took a more objective approach to the past, but at the same time transfigured it. In the intertwining of the culture of memory and the construction of political identity in writing, art and other media, the historical authenticity between narrative formation and historical politics rarely played a role in the past. 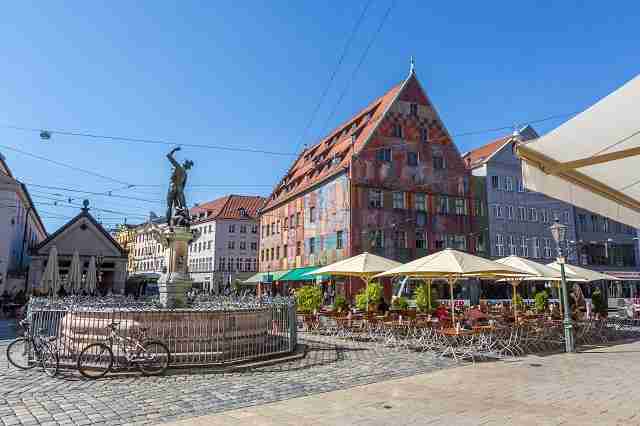 While the Lechfeld Battle was still instrumentalized and romanticized under National Socialism, the democratization of the post-war period led to a certain paradigm shift towards a neutral factuality.
The historical event of the Lechfeld Battle thus underwent a multiple change in cultural consciousness over the course of time, was modified according to the interests of the various actors and found manifold idealistic and medial expression in all epochs – from medieval veneration of saints, early modern representation, political legitimation and communication of the idea of the Reich, the Baroque cult of relics or the Bavarian historical politics of the 19th century to the National Socialist reinterpretation.

The multifaceted instrumentalisation by world views and ideologies, which began rapidly after 955, is continued – in a much toned down manner – to the present day through contemporary attributions of value. In the early 21st century, however, Otto the Great and Ulrich are no longer regarded as defenders of the Christian West and the victorious battle is no longer glorified in any way. Instead, the present approach fits into the leitmotif of democratic, historical multi-perspectivity.

The Battle of the Lechfeld of 955 still has a firm place in the cultural consciousness of Europe despite all the changes.