If you mention the cinnamon star, especially if you do so around Christmas, then everyone’s eyes are sure to light up. On the one hand, of course, this has to do with the effect of cinnamon itself, whose essential oils calm and relax us and whose scent carries us away to childhood days long gone. But I think it is even more important that the spice itself is deeply anchored in our cultural memory and that its possession has always been synonymous with prosperity and good taste.

For well into the 18th century, it was one of the most expensive spices in the Occident and only very few people could afford to waste their money on such a rare and valuable delicacy. For this reason, the average citizen could only look on with uncomprehending amazement at such excesses as when, in 1525, the Augsburg merchant Anton Fugger burnt Charles V’s promissory notes in front of him in a fire of cinnamon sticks [1] -an unimaginable event even in these circles and an almost brazen sign of wealth, power and decadence.

We will return to Charles V later, as the first written mention of the cinnamon star is directly linked to his name. But first I would like to take you on a little journey through our history. 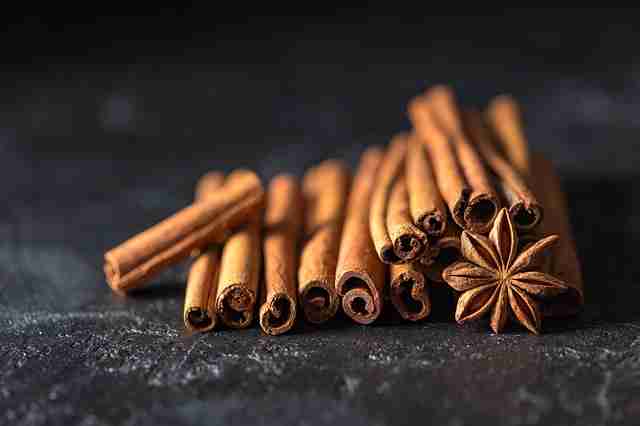 What hardly anyone is aware of is the fact that cinnamon and numerous other spices have been used since the campaigns of Alexander the Great and that a lively trade with Asia began as early as Roman antiquity. In the 10th century, triggered by a long period of peace and prosperity, this trade began to intensify and it was the lagoon city of Venice that was the first to seize the opportunities inherent in the spice trade and become one of the leading powers of the Occident as a transhipment point between the Orient and the Occident.

However, not only the cinnamon and the even more important pepper trade went through Venice, but also other spices such as ginger, nutmeg or cloves were traded and delivered via middlemen to the far corners of Europe.

Over the next centuries, the use of these spices was to become truly lavish, so much so that the French social historian Fernand Braudel was right to call it the “madness of spices”. By this he meant a mutual outdoing of the European aristocratic class in luxury and ostentation, which was particularly evident in the food. The more spices were used on the table, the tastier it seemed to contemporaries and the more respected the host. This led to such exaggerations as, for example, at the wedding of the Duke of Burgundy, when the cooks consumed almost 200 kilograms of pepper at his banquet (in addition to all the other fine ingredients, mind you!).

It is therefore not surprising that another group soon cast an eye on these wonders of the Orient – a group that, although itself dedicated to asceticism, was only too willing to break these rules for a higher purpose and use spices as lavishly as the nobility. For early on, it was customary among the monks to make exquisite baked goods to celebrate the birth of Christ, using the choicest and most expensive ingredients out of joy at the coming of the Lord. And without question, cinnamon was one of them! And so it was supposedly the Cistercians of Altzella Abbey [2] near Nossen who were the first to use this spice for their Christmas cakes in the middle of the 12th century and thus invented the cinnamon star.

However, there is no written record of this date and therefore there are other theories about the “true” birth of the cinnamon star. The German pastry researcher Irene Kraus, for example, dates its creation to the 16th century, because this is the first time an exact date can be established, and this brings us back to Charles V, as already mentioned.

Charles V – hardly any other ruler is surrounded by such a nimbus of splendour and glory as he. Probably everyone is familiar with Titian’s painting in which he seems to float high above the earth on his horse in his magnificent armour. But even though he was one of the most powerful rulers in European history, in whose lands “the sun never set”, we all too easily forget how fiercely contested his empire was and how hard and deprived this made his life. For all his life he moved from theatre of war to theatre of war, and his empire was so vast that a new opponent arose like a hydra after every victory. Of course, he did not fight alone in all these campaigns, but enjoyed the help of changing confederates. This was also the case in the mid-1530s, when he once again wanted to strike out against his long-time enemy, the French King Francis I, and sought the support of the Roman Pope to do so.hrhundreds, triggered by a long period of peace and prosperity, this trade began to intensify and it was the lagoon city of Venice that was the first to seize the opportunities inherent in the spice trade and, as a transhipment point between the Orient and the Occident, became one of the leading powers of the Occident.

When he arrived in the “eternal city” for this purpose, it was naturally a great event and the official appearances and secret negotiations were interspersed with numerous celebrations. An old companion of Charles V, Cardinal Lorenzo Campeggio, who had already been present at Charles’ coronation in Bologna and who had been one of his most important allies at the Diet of Augsburg, also hosted a banquet for the Emperor. At this meal, the twelfth course included macaroons, aniseed and pistachio confectionery, candied orange peel and cinnamon stars – an event that, fortunately for us, was recorded in writing and is now considered the official birthday of the cinnamon star. 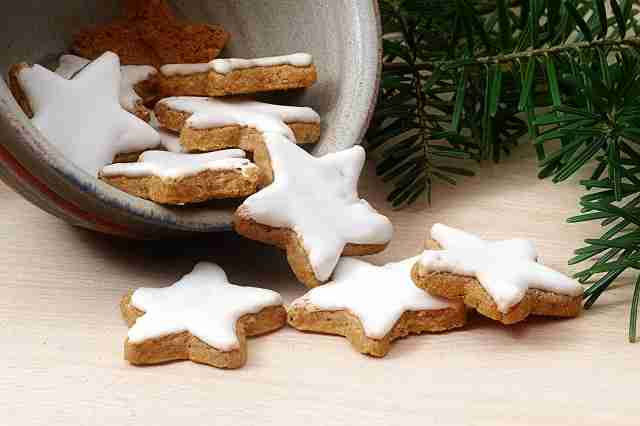 However, it was to take quite a while before cinnamon stars found their way into German cookbooks. As already mentioned, this had to do with the fact that the spice was still unaffordable for the average citizen for a long time and was therefore hardly used.

However, due to the immense profit margin that lay in the spice trade, other European powers tried to challenge Venice’s monopoly on spices at an early stage. Portugal was the most determined and when Vasco da Gama actually managed to bring a cargo of spices to Lisbon in 1499, the country took over the supremacy in this lucrative business. But not for long, because it was already displaced by the Dutch and English in the course of the 17th century, and due to the new competitive situation (and the beginning of spice cultivation on plantations), prices fell so much that spices eventually became an almost “normal” ingredient of food.

Cinnamon, too, eventually became so cheap that it became more and more widespread, and in the course of the 18th century recipes for cinnamon star can therefore be found in all German countries. For example, the author Johanna Von der Mühll writes that in the second half of the 19th century “cinnamon stars, along with Basler Leckerli, Brunsli, Mailänderli and Hagebuttenschäumchen […] were among the typical Christmas cookies of Basel’s bourgeois families.” [3]

The fact that the shape of the cinnamon stars is supposed to be reminiscent of the Star of Bethlehem is, by the way, relegated to the realm of legend. But I liked this story too much not to at least mention it.

By the way, making cinnamon stars used to be even more strenuous than it is today. In Rosina Gschwind’s cookbook [4], for example, you can read that you should stir the egg whites with the sugar for an hour – by hand, of course, which must have been quite strenuous work! Perhaps we should make a little more effort in this sense and see the cinnamon star not just as one of many pastries that one eats at Christmas, but as a delicacy with a long and special history and thus see it as an important part of our culture.

(1) … Not least the Fugger researcher Richard Ehrenberg pointed out that this story is fictitious. In reality, it appeared very early in a similar form in connection with various merchants and the reference to Anton Fugger was only artificially created at the end of the 17th century. 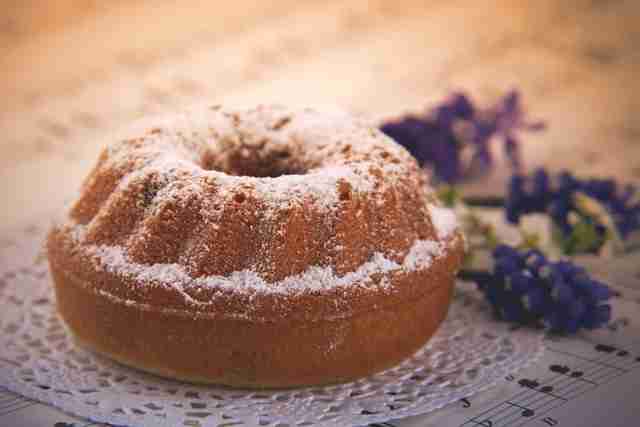 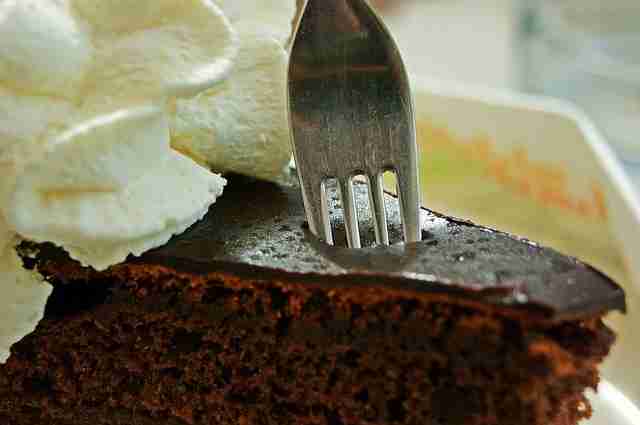 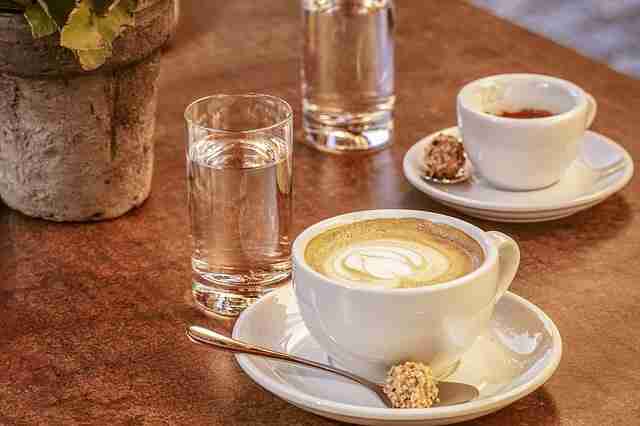 Glass of water with coffee