A whole life for art

Childhood and youth on Lake Constance

Marie Ellenrieder was born in Constance in 1791, the youngest of four daughters of a wealthy bourgeois family. At that time, Constance belonged to the Austrian province of Vorderösterreich and had a population of around 4,000. Marie’s father was the bishop’s court clock master, her mother came from a well-known family of painters. She was the daughter of the church painter Franz Ludwig Hermann (1723-1791). The four daughters of Konrad and Anna Maria Ellenrieder grew up sheltered in Constance, although the city experienced turbulent times in the years following Marie Ellenrieder’s birth as a result of the French Revolution and was occupied several times.

Like her sisters, Marie Ellenrieder received her four-year school education at the school of the Dominican convent in Zoffingen. At the Zoffingen teaching and work institute, much emphasis was placed on housework and religious instruction, whereas less time was devoted to imparting knowledge. The Zoffingen convent school was the only educational institution for girls in Constance at that time. A secondary school for girls did not exist until the second half of the 19th century.

In 1805 – Ellenrieder was 14 years old and her school days were already some years behind her – Constance fell to the Grand Duchy of Baden as a result of the Peace of Pressburg.

Already at the convent school, Marie Ellenrieder often received praise for her beautiful handwriting. Her artistic talent then also became apparent in her youth. At the age of 19, she began an apprenticeship with the Constance-based miniature painter Joseph Einsle, which she completed after three years. Miniature painting was popular in bourgeois circles at that time and was often practised by female artists. 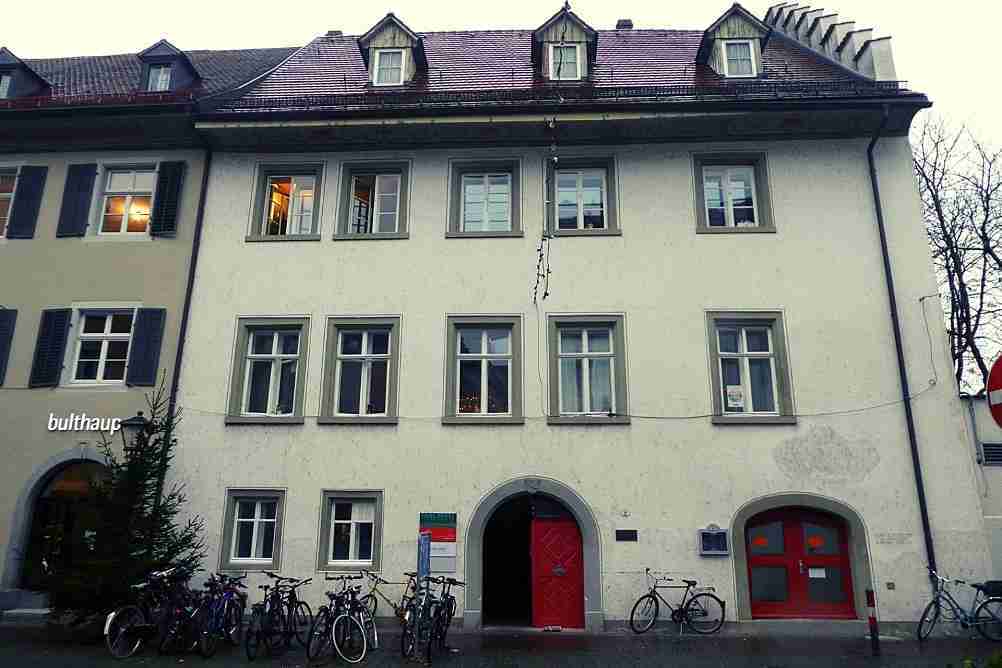 Perhaps towards the end of her apprenticeship, or even earlier, Ignanz Heinrich von Wessenberg (1774-1860), Vicar General of the Diocese of Constance, became aware of the young artist. In him she found a mentor who would encourage her for many years. It was thanks to Wessenberg that Marie Ellenrieder was the first woman to be admitted to a German art academy to study properly: in 1813 she began her studies at the Royal Academy of Fine Arts in Munich, where she studied until 1816.

After completing her studies, Ellenrieder returned to Constance and lived again in her parents’ house. There her father had set up her own studio. She received her first commissions through the mediation of her mentor Wessenberg and her talent for portrait painting soon spread beyond the city limits. In the following years she painted portraits of the princely family of Fürstenberg, among others, and produced her first works for the House of Baden. In 1820 she was commissioned to create three altarpieces for the St. Nicholas Church in Ichenheim, making her the first woman in Baden to be allowed to produce art for a Catholic church!

In 1822, the painter set off on a long-awaited trip to Rome. There she lived with her friend Katharina von Predl (1790-1871), whom she already knew from her time in Munich and who had already lived in Rome for some time. Ellenrieder worked a lot during her years in Rome. She studied and copied works by old masters, but also created her own paintings. In Rome Marie Ellenrieder also met the Weimar painter Louise Seidler (1786-1866), who was a few years her senior, and with whom she remained in contact later on. Her acquaintance and joint work with the so-called Nazarenes, a group of painters around Friedrich Overbeck (1789-1869), had a formative influence on her artistic style.

Marie Ellenrieder returned from Rome to Constance in April 1825 and painted further altarpieces for Catholic churches in the following years. In 1827 she was finally commissioned by the Grand Duke of Baden Ludwig to paint the picture of the main altar for the church of St. Stephan in Karlsruhe. Also in 1827 she received the medal for art and science of the Badischer Kunstverein.

In 1829 the Grand Duke of Baden appointed her painter to the court of Baden, which was connected with an annual honorary salary of 300 gulden. Later the salary was increased to 500 gulden – the artist had asked for it. In return, however, she now had to deliver a “compulsory painting” to Karlsruhe every year.

Her commissions took Marie Ellenrieder to Zurich, Schaffhausen, Basel, Donaueschingen, Sigmaringen and Karlsruhe. For the most part, she was able to make a good living from her art and, together with her sister Josefine, treated herself to holidays and stays at a health resort. She also undertook a second trip to Rome in 1838-1840 together with her sister.

In the last two decades of her life Ellenrieder was increasingly plagued by illness, but she still worked several hours a day and created many more works in her last years. She died on 5 June 1863 at the age of 72 in the house where she was born, probably as a result of pneumonia.

Marie Ellenrieder was brought up very religiously and her deep piety increased more and more in the course of her life. Influenced by her deeply religious mother and certainly also by her education in the convent school, she often felt, however, that she was not pious enough.

“O! dear holy God! what a day it has been! a day full of vanity thoroughness & bitter toil, I feel thoroughly & thoroughly weakened. That which I offered you today, O God, as a gift, namely not to complain any more, I have kept faithfully, but you see, I was lacking in another way. I wanted to be good, I talked, I asked, I flattered, I accompanied, oh what wretched stupidity I practised! are such things worthy of a sensible person! In my 53rd year, shall I not yet become master of myself, Lord, over the wretchedness of the world? After God has already made all this so deeply apparent to me. – I cannot even comprehend my sensual indulgence in this: I am weaker than all the weak.” (quoted from Edwin Fecker) 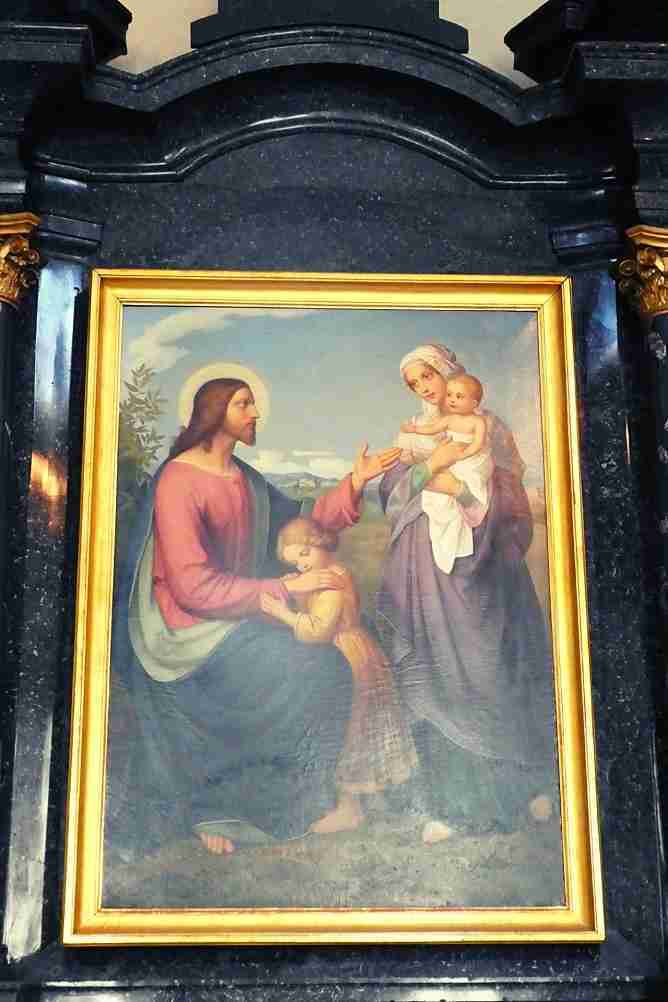 Ellenrieder wanted to serve God and art. For her, art was a service to God. She had probably already made this decision in 1820 after the death of her mother. After her return from Rome, influenced by the art of the Nazarenes, she turned away from portrait painting, at least inwardly, and towards religious art.

Over the years, the Catholic faith and the Catholic Church became more and more dogma for her. Thus, even during the Baden Revolution, she feared first and foremost that the Church might be harmed by the democratic efforts.

Apart from times when she was travelling or when commissions required her presence on site, Ellenrieder lived and worked in her parental home. After her father died in 1834, she lived with her older, also unmarried sister Josefine until her death. Josefine took care of the household, guests and daily needs. She had her sister’s back in every respect, as Ellenrieder worked tirelessly, even when she was ill and still sat at her artwork for many hours every day in her old age.

Marie Ellenrieder never married. Her whole life was reserved for her work, her art. There was no room for a husband and children, although she certainly did not lack admirers. She was financially independent, because she earned well from her art. She paid well for her commissioned works and did not shy away from sending reminders to defaulting clients. For example, in 1839 she wrote in a letter to her good friend Karl Christoph von Röder (1789-1871), who had purchased a painting from her:

“Allow me, however, not to conceal from you my astonishment that you did not transfer to me the sum agreed upon in full, nor the amount I had paid for the frame; I thought I could expect it so reliably that I disposed of it before I left. – Since then I have had to change my accounts, which is always more difficult with letters. Not true, dear friend! You will send the arrears quite soon?  So I should have received 500 f for the picture, and for the frame and box I no longer know 48, or 50 f, of course I left the receipted account from Mr. Weber at home, but I wrote it to you in my penultimate letter. However, all in all, only 455 f have come, so I would still be almost 100 f too good.” (quoted from Edwin Fecker)

Marie Ellenrieder was conservative in her political and religious views, even arch-conservative as she grew older. In other areas, however, she showed herself to be progressive and self-determined: she studied, embarked on her first trip to Rome alone and fulfilled her wish to live there for a while. Not usual for a single woman from a middle-class family. Moreover, she managed to gain a foothold in a field of art that was predominantly dominated by men and became a court painter at the Baden court. 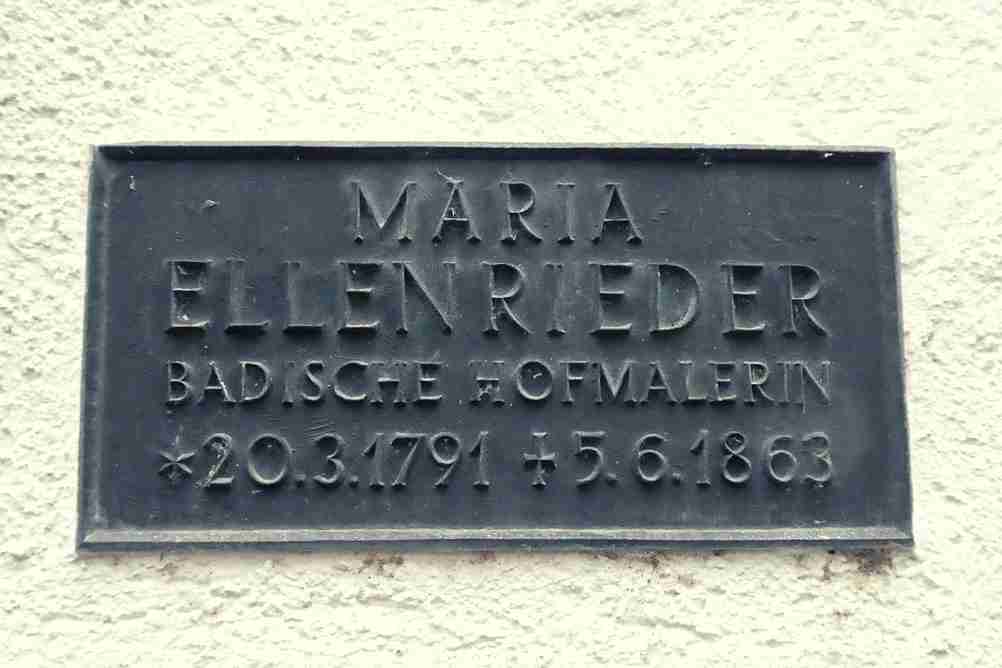 Below you will find a selection of works by Marie Ellenrieder in museums and churches.

The original appeared on: Textdestille – A Whole Life for Art: The Constance Painter Marie Ellenrieder 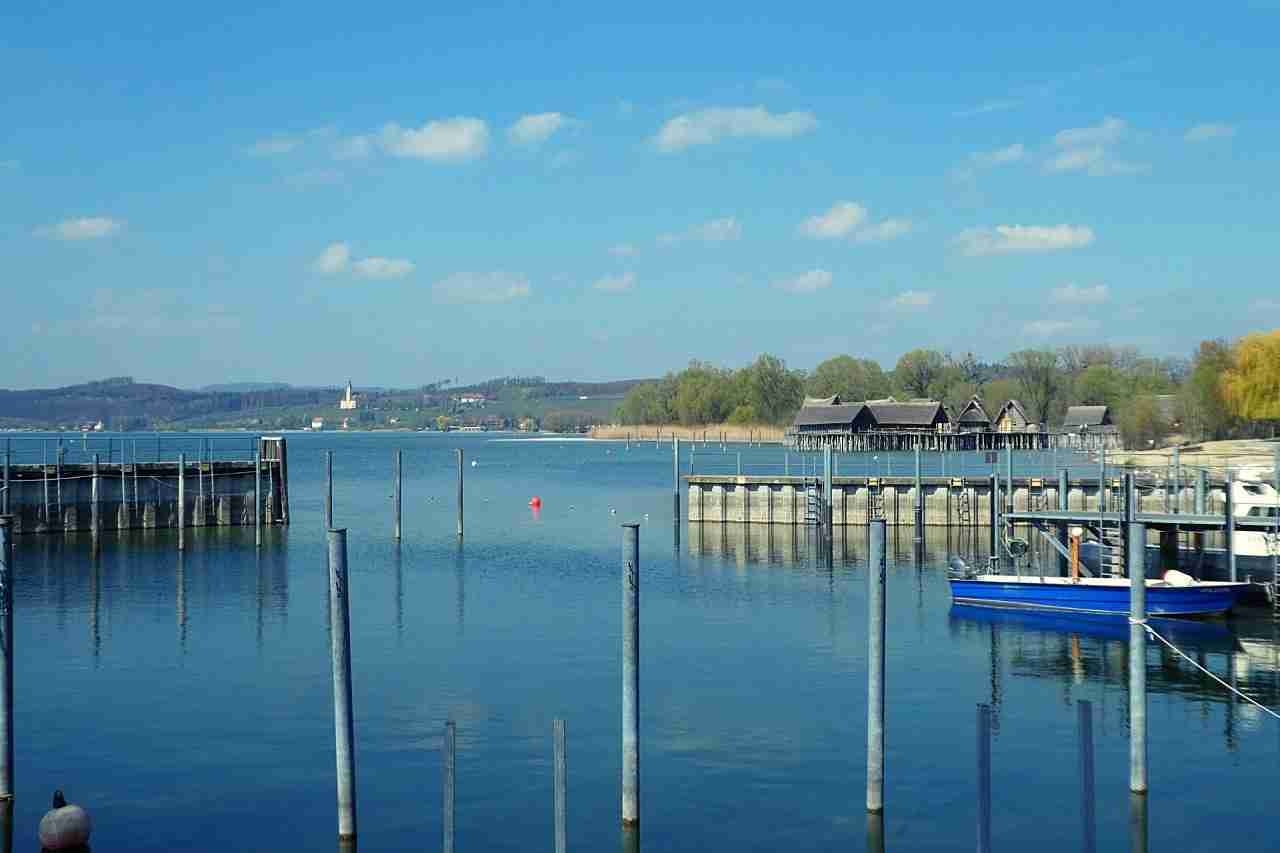 All articles on Lake Constance 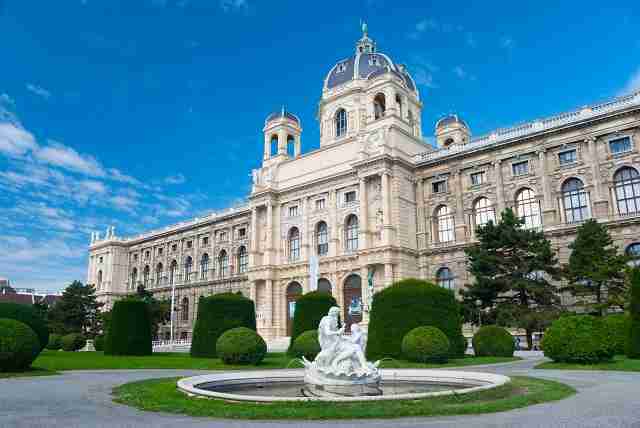 The Town Clerk of Vienna

Women in art and history