The seven wonders of Rome – The Colosseum

“As long as there is the Colosseum, there will be Rome, if the Colosseum falls, Rome will fall, and if Rome falls, the world will fall,” wrote in Latin the venerable Bede, a scholar and historian at the turn of the seventh and eighth centuries and now considered a saint and father of the church. He collected in his writings a probably well-established saying since he never left his monastery in Wearmouth. In 1812 his words were translated by Lord Byron in his Childe Harold’s Pilgrimage. The Colosseum thus entered the collective imagination of the world, which in more modern times became Pop and thus consecrated by the Cinema. In the eighties began his career as an archaeological park becoming the most visited site in the world after the Chinese wall, not being so extensive and not having the contribution of a local population such as the Chinese.

Now almost all of us know that it was the place where the gladiator games took place in Rome but the divergence between a “monument” and a kind of stadium for bloody fights prevents us from understanding the building in its birth and its existence. To understand it we must go back in time, to when the Eternal City was the first metropolis in history, in a world whose calculated inhabitants seem to have been between two hundred and three hundred million people, between one-third and one-fifth of what we have today. About a quarter of the world’s population lived in the Roman Empire, a fifth of these in the Italic peninsula and 12% of the latter in the capital: Rome. We will have to wait until the 19th century for another city in the world to reach such a number of inhabitants.  We are talking about 1,200,000 people, crammed into a very small space compared to the current urban extension: it is estimated a density fifteen times greater than the most populous areas of the city today.

In particular, the project of the Colosseum was born after a real civil war that followed the suicide of the last member of the first imperial dynasty: the Julio-Claudian. The 69 A.D. was known as the year of the four emperors: it will be Vespasian, thanks to his talents as a military strategist and diplomat, to conquer permanently the imperial seat. 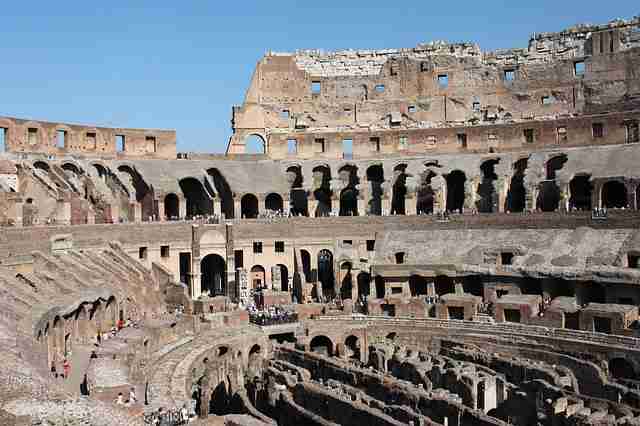 The conquest of the favor of all social classes was urgent and the large imperial residence left by Nero offered an excellent opportunity. The artificial lake that was located in the valley was immediately drained and used to lay the foundations of the largest amphitheater of the Empire and the first stone of the capital. The word Amphitheater comes from the greek and means “building that has places all around to look”. It is estimated today that it could accommodate up to 75,000 people. It was built in eight years using simultaneously four teams of architects, engineers, workers and slaves with their machines. In fact it is often said erroneously that in ancient times they did not have machines but it means engines, in fact they had cranes, inclined planes, pulleys, gear wheels, complex systems of levers and their combinations. Among the driving forces, in addition to the human one, they could count on the animal one and the hydraulic one. However, in order to finance this construction Vespasian had to use all his ingenuity.

He sent his son, Titus to bring what they considered peace in the rebellious province of Judea: the city of Jerusalem was razed to the ground with the second temple, the population deported with the treasures kept in the sacred building. But it was the public baths of the empire that solved the problem. They sprang up everywhere in the cities, offering a free individual service that guaranteed urban hygiene. The managers sold urine at a high price, a substance necessary for the tanning of hides and for the coloring of fabrics. It was they who were taxed by Vespasian. Imagine the daily life of the time and the role that leather played in a civilization without plastic or technical fabrics, imagine all the uniforms of the legionnaires, holders, flasks, straps, and so on. But also imagine how beloved tunics dyed in expensive colors and of distant origin were in a city where wealth and power were flaunted. 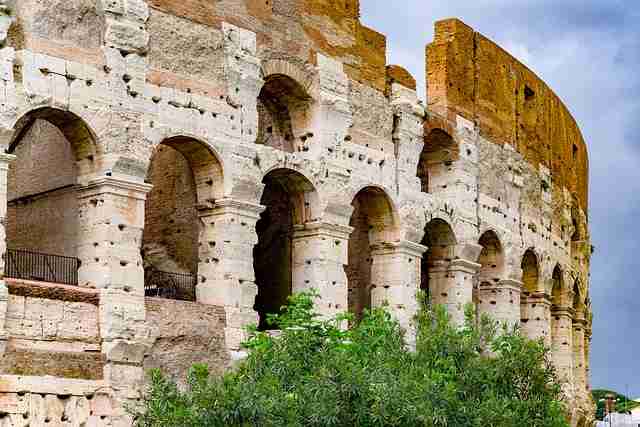 It is said that Titus was annoyed and went to his father and expressed the fear that he would go down in history as the emperor of urine. It seems it was then that the emperor Vespasian pronounced the famous words that are still echoed around the world today: “Pecunia non olet” (Suetonius, De vita Caesarum VIII, 23), that is, money has no smell, it leaves no trace of its origin. If in fact no one can blame the phrase itself, it must be admitted that history has left the name “vespasiani” to urinals in Italian.

The news was circulated even in the most remote territories before the end of the works. Not existing radio, television or newspapers of sort from a part it was sponsored the word of mouth exaggerating also the capacity of public of the monument from the other coins were coined bringing from a part the stylized monument from the other the head of the emperor. He did not, however, see the end of the work even though he died a natural death and sources to praise him report that he died standing, supported by those closest to him. It was Titus who inaugurated the Flavian Amphitheater from the name of his family, the Flavians, with one hundred days of games in 80 AD.  The name it bears today seems to have been originally a colossus: a gilded bronze statue, about thirty-five meters high, originally portraying Nero, then transformed into the God of the Sun. When it was finally cast, it left a memory of itself on the area and then on the colossal structure that occupied the bottom of the valley.

Inside the Colosseum took place mainly three types of games. In the morning there were the hunts with animals imported from all corners of the empire: crocodiles, lions, bears, giraffes, elephants, gazelles, wolves, wild boars, tigers, vultures, etc.. Imagine the capture of these animals in their natural living environments, transporting them for months to Rome so that they would not survive long. Those who were trained to meet, fight, chase, provoke the animals were called venatores or bestiarii and their barracks was the ludus Matutinus. In the middle of the day changed and took the scene of executions.  Imagine for example the myth of Icarus, who was imprisoned with his father Daedalus, inventor and architect, in the labyrinth that he had just built for Minos. Daedalus made wings out of feathers, linen thread and wax so that they could escape from the monster. He advised his son to fly at half height so as not to weigh down the wings with humidity and not to allow the sun to melt the wax. The teenager hovered and, oblivious to his father’s words, rose higher and higher allowing the sun’s heat to disassemble the portentous wings and crashing to the ground. To the criminal, after being inserted in a sort of labyrinth with an alleged monster, were tied some wax wings and then hoisted to a catapult was launched in the air sure of the destiny that was waiting for him, because of the force of gravity and not of the sun.

In the afternoon there were the gladiatorial games that reflected, as the two previous events, a military society where infant mortality was very high, where at fourteen you could already marry, at sixteen you were considered an adult and the boys could already enlist, after all for them gymnastic exercises were an essential part of education. Between the ages of twenty and thirty-nine most citizens joined the legions, but the daily dangers were much more insidious than wars because of the poor development of medicine and people died easily as a result of childbirth, infections, fevers and pneumonia. 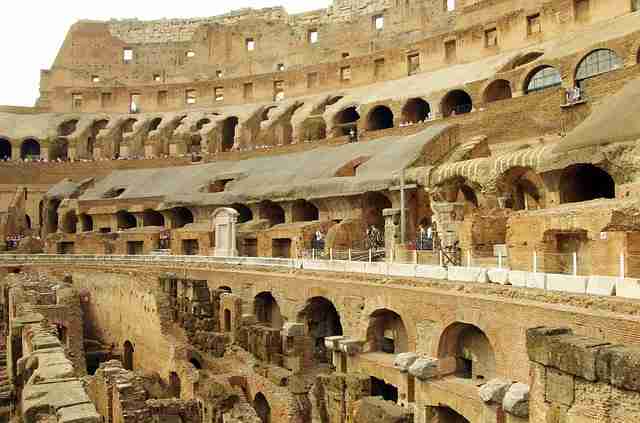 A man lived an average of forty years, a woman twenty. The career of a Roman was called cursus honorum and was a set of charges both political and military. The figure of the gladiator, from a simple slave to a trained fighter who received money for every victory, who was freed after fifteen battles won and whose children became Roman citizens, was the symbol of a society that believed in social mobility, courage, skill and combat strategy. The gladiators in Rome were imperial property and their cost was precisely covered by the emperor himself, when they reached fame they were part of that machine, passed into history as “Panem et Circenses”, that is bread and games, with which the Caesar Augustus of turn won the favor of the people.

Along the north side, outside, you can still admire the brackets and holes of the crown that ended the facade of the colosseum: they were supporting elements for 280 poles that with a complex system of ropes and pulleys allowed the installation of a tent, the so-called Velarium, to protect the public from the sun. Three hundred sailors, specially made to come from Cape Miseno, were responsible for a week of assembly and then its proper orientation during the games.  Inside the structure remain the substructions of the stands, of the seats, of the stairs; in the middle there was what we would call today the stage but that bore the name of “arena”, probably from the Latin name of the sand that seems to have covered the wooden floor of the structure, disappeared without a trace. From the second floor you can admire the design of the underground passages that were under the arena: it is the best preserved part of the Colosseum since it was excavated only in the thirties; it betrays the presence of at least twenty-four hoists connected to ropes, pulleys, and cogwheels. This is a mechanism hidden to the public that hoisted animals and gladiators managing to open hatches camouflaged in the floor surprising the spectators. Instead, in the central corridor, the longest, several choreographies were hoisted from below thanks to a system of inclined planes. And the naval battles? Perhaps they did one at the time of the inauguration, to impress the public, before these underground structures were built.

Want to be informed about the latest activities?