August 21, 158 years ago: The Vienna City Park is opened as Vienna’s first public park.
To avoid confusion, the Volksgarten is considered Vienna’s first park, but it was the Stadtpark that was also planned and designed for the public.  Even before the Stadtpark, the Kaiser-Franz-Josefs-Park (1860) was opened, but this no longer exists in its original form.

Now to the city park:

The city park was created on the former water glacis in front of the city wall. After the decision was made to demolish the wall, the mayor of Vienna, Andreas Zelinka, demanded the planning of a public park. In September 1860, the City Extension Fund gave the City of Vienna, free of charge, an area of 94,000 m² for the creation of the city park; in 1861, 51,000 m² were added on the right bank of the Vienna River. For the design of the park on the left bank, the cost estimate was 115,000 guilders; in 1862, the actual cost was 180,000 guilders (approx. 1.6 million euros).

The park was laid out in the style of an English landscape garden – planned by Joseph Sellény and executed by the city garden director Rudolf Siebeck.

On August 21, 1862, a first part of the city park was opened. Within the next 5 years, a children’s park was also designed and the pond was turned into an ice skating rink in winter. Electric lights were installed for the working people who could only come to skate in the evenings.

Until 1956, there were no benches in the Stadtpark (or in any other park in Vienna), but armchairs that could be rented for a fee from the armchair ladies. 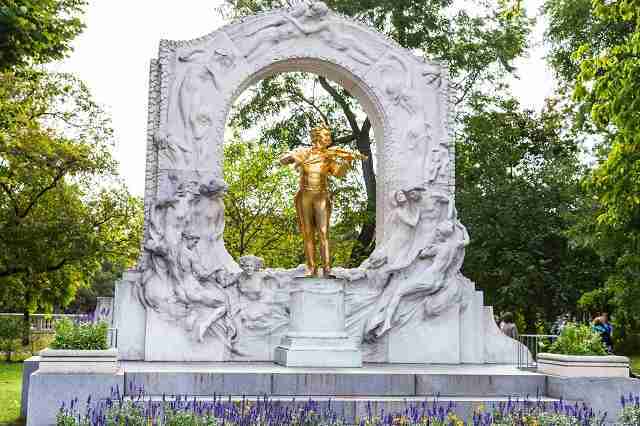 Among the sights of the city park are the many commemorative statues, first of all the golden Johann Strauss (created by Edmund Hellmer): one of the most photographed monuments of Vienna. There are also statues of musicians Franz Schubert, Franz Lehár, Anton Bruckner and Robert Stolz, painters Hans Makart, Friedrich von Amerling and Emil Jakob Schindler, as well as Vienna’s mayor Andreas Zelinka. A female Danube fountain can also be discovered in the park.

In addition, he city park is separated by the Vienna River, which, after all, is largely built over in the city. Here you can see not only the river, but also the magnificent river portal, which was built according to the plans of Friedrich Ohmann and Josef Hackhofer in 1903-1907. Also according to the plans of these two, the Meierei (a milk drinking hall) was built; after the Second World War, it was extended and after a renovation in 2004, it now houses the “Steirereck” restaurant.

Not to be forgotten is the Kursalon in the city park. There was already one at the former Wasserglacis and, as the name suggests, healing water was served there for drinking cures. With the creation of the city park, a new building was erected according to the plans of Johann Garben in the style of the Italian Renaissance (today “Kursalon Hübner” – named after the tenant Hans Hübner) and opened in 1867. In October of the following year, the first concert of Johann Strauss son took place, after which the Kursalon became a popular dance and concert venue, especially during the time of the Strauss brothers. Today, the Kursalon is still a popular venue for balls and concerts, but you can also simply enjoy a coffee there.

The avenues of the park on the Ringstrasse side form a noise barrier against the traffic. The planting of the park is designed to bloom all year round. The lawn may be walked on only at the designated lawns.