Since the founding of Munich, there has been daily market activity in the center of the city: on Schrannenplatz – today’s Marienplatz. This is where the two important trade routes met: the Wine Route and the Salt Route. All goods for daily needs were traded here, special goods were almost only available at Dult times.

However, the lively market activity was a thorn in the side of the authorities at the beginning of the 19th century. Bavaria became a kingdom in 1806, and Munich was its capital and residence. The city’s main square was not to be besieged on a daily basis. And so the nearby Hl. Geist Spital was demolished piece by piece and a few stalls were moved to this area. When this was done in 1823, a fancy name was needed, of course. And since they wanted to be particularly educated as a capital and royal city, the decision was quickly made for the Latin “victualia”, meaning “food”, and thus we speak of Munich’s Viktualienmarkt today.

The “belly of the city” is still called the Viktualienmarkt today. Here you can find all the food and delicacies your heart desires. From the common yellow beet to the exotic flying pineapple, everything is available. On Metzgerzeile, “the apostle butchers” compete for customers. There were once twelve of them, hence the name. A horse butcher can also still be found at the market. In the honey house, you are spoiled for choice with over 60 types of honey, just as at the neighboring cheese stand with almost 180 different types. If you are overwhelmed by the selection, you can fortify yourself with a freshly squeezed juice or a ginger shot, which is currently very trendy. Then it’s on to the overflowing offers of the mushroom and fish traders. On the outskirts are the flower and decoration dealers – the table with the exquisite food also wants to be beautifully set at home.

But the heart of the market is without a doubt the beer garden. And there can only be one answer to the question “Where is Munich still “really Munich” today?”: right here, under the tall chestnut trees, where guests from all over the world and locals meet, as well as old and young and rich and poor. That’s where the star lawyer sits next to the sales clerk from the department store next door, because it’s in this square in particular that Munich’s guiding principle applies: “Live and let live!” All visitors are united by the longing for a little sun, coziness and a hearty snack. These are bought in advance at one of the approximately 150 different stands and consumed on the spot in the beer garden. About half of the area, recognizable by the simple beer benches, is dedicated to the old beer garden tradition. This means that you can bring your own food, only the beer (or other beverage) must be purchased on site. 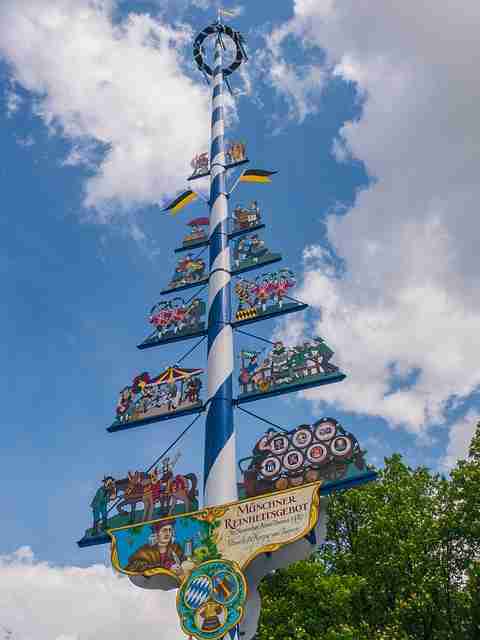