Georg Raphael Donner (engl.: thunder) is one of the most important Austrian artists of the 18th century and his famous fountain on the New Market is certainly also among the most famous and beautiful fountains in Vienna. But Donner created a whole series of other works of art, some of which are little known, some of which are even almost undiscovered!

Georg Raphael Donner was born in 1693 very close to the then imperial capital and residence. The small village of Essling in Marchfeld is today part of the 22nd district of Vienna. His father was a carpenter, already at the age of 11 Georg Raphael was apprenticed to the court and chamber jeweler Kaspar Brenner, at 17 he came to Giovanni Giuliani who worked in the monastery of Heiligenkreuz. [1]

Among Donner’s early works, it is one of those little-known works of art mentioned at the beginning, is one of the absolute architectural jewels of St. Pölten – the gable relief of the house at Herrenplatz 2. The palace was built in 1724/25 for the sub-commissioner of the quarter under the Wienerwald Jakob Weinhardt von Thürburg. Whereas in the past it was assumed that Jakob Prandtauer, who was once omnipresent in St. Pölten, was the author, because the construction was in the hands of his relative Joseph Munggenast, it is now clear that the building is more likely to belong to the circle around Johann Lukas von Hildebrandt. For the gable relief of the Aurora, who here triumphs over the darkness by scattering roses and is plunged into the depths with great emotion, the then still young Georg Raphael Donner was brought in. Donner, however, only designed the relief, the execution of the stucco work was the responsibility of the St. Pölten sculptor Joseph Pabel. [2]

In Vienna, however, Donner apparently could not yet establish himself completely; other artists had occupied all the niches, and so in 1725, after some travels, for example to Dresden and Italy, he went first to Salzburg. [3] From there he travels to Italy again in 1729 to buy stone material, then continues to Pressburg, for there he has meanwhile entered the service of Prince-Primate Count Emmerich Esterházy. In the capital of the Kingdom of Hungary, Donner now already maintains a large workshop and employs several students. [4] But the time in Pressburg was also of great importance for his artistic work in other respects, for here he worked with lead for the first time. With metal casting, in which Donner had long been interested, a new formal language was now open to him, and in Pressburg he even had his own casting house. [5] 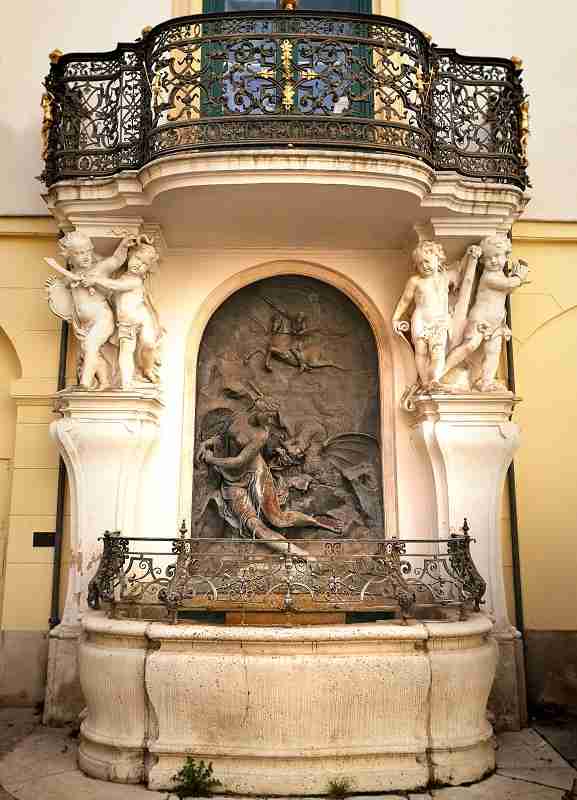 But despite his successes in Hungary, the connection to the imperial capital and residence city did not break off, and in 1739 Donner finally went back to Vienna for good. But – and this is an absolute novelty – Donner did not work here primarily for the imperial house or the high nobility, as was usually the case, but for the bourgeoisie and the city council! [7]

In the first half of the 18th century, all of Vienna begins to give itself a splendid appearance. The Turkish danger was over, people breathed a sigh of relief and rebuilt the city, which had been badly damaged, in new splendor. In addition to the nobility and the imperial family, the bourgeoisie of the city did not want to be left behind, and the magistrate also did his part. The old town hall, which was not very respectable, was transformed into its present baroque form in 1699, and other municipal buildings, such as the civic armory, were also rebuilt or redesigned. [8]

As early as 1737, when Donner was still in Bratislava, the city council had taken the decision to build the magnificent fountain on what was then Mehlmarkt – today Neuer Markt. The council had decided to remove the drawing fountain located on the square and to erect a fountain of larger size there. 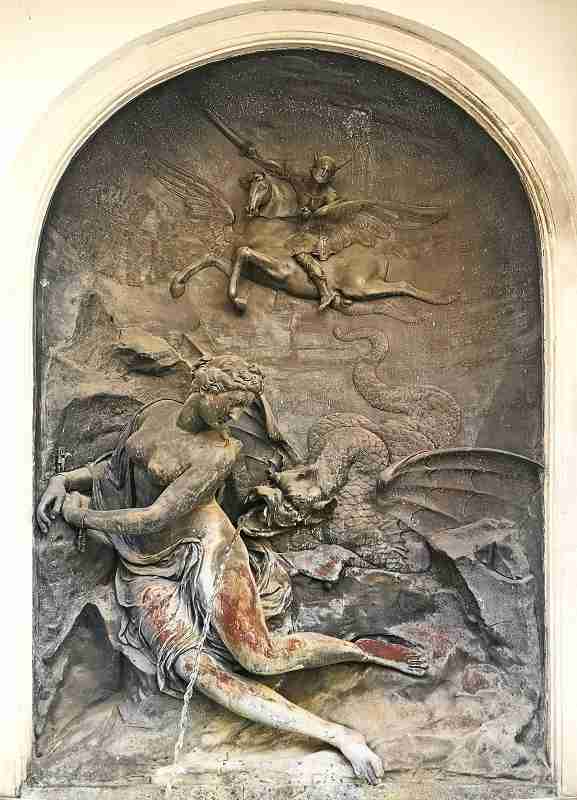 Previously, the pillory and gallows had been removed by order of the emperor, and now there was room to build an appropriate fountain. The awarding of the contract was preceded by a competition in which Georg Raphael Donner was able to prevail against the greats of his time such as Lorenzo Matielli. [9] The fountain on the Hoher Markt was thus the first large monument in Vienna that had not been commissioned by the imperial house or the high nobility, but by the city of Vienna itself. [10] Accordingly, the “Providentiabrunnen”, named after its central figure, is also devoid of any religious or imperial symbol. The Providentia as a symbol of foresight and prudence in the center is to be seen as a personification of the “wise city government”, surrounded by the fish most common in the Danube and the personifications of the rivers March, Enns, Traun and Ybbs. [11] These figures at the edge of the fountain basin are of an incredible motion. The Traun, in the form of a young, unclothed man, has literally risen out of the basin and is turning toward the water. [12]

The city council under Mayor Johann Adam von Zahlheim was apparently satisfied with the work of art and shortly thereafter commissioned Donner to create another fountain. Another work was to be created at the town hall in Wipplingerstrasse, the so-called Andromeda Fountain. Again, a mythological female figure is at the center. Andromeda stands symbolically for the city of Vienna, the dragon that threatens her are the Turks, who had besieged the city just a few years before. But Perseus rushes to the aid of the bound beauty, just as the relief troops once rescued besieged Vienna. This is one of the last orders that Donner can carry out. The fountain in the City Hall is built between 1740/41 [13] – on February 15, 1741 Donner dies at the age of not quite 48 in the Managetti House on Vienna’s Heumarkt (today the 3rd district). [14] At his death, his financial circumstances were highly unfavorable, so that his widow even refused to accept the inheritance in order not to have to pay off the debts. We do not know, however, where the outstanding debts came from, possibly he had miscalculated the purchase of expensive material for his works. [15] 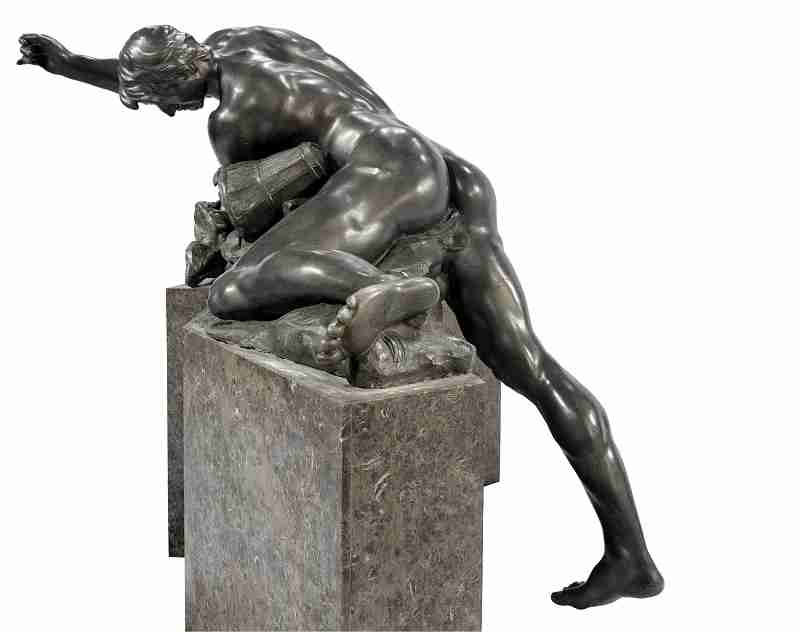 Donner’s art is still unique today. It is no longer the pure Baroque from whose formal language he had outgrown, to the Rococo Donner is only with some works possibly to be attributed, most likely one will be able to call him one – or the – pioneer of classicism in Austria. [16]

Nevertheless, his main work almost fell victim to the overzealousness of the Maria Theresian Chastity Commissions. For the commission, which was actually only supposed to put an end to the unchaste goings-on of the Viennese, had also made it its task to keep art “clean”. Thus, in 1771, the order was issued to remove the naked fountain figures. Fortunately, the sculptor Georg Martin Fischer was commissioned to melt them down – he did not comply with the imperial order and hid them in the Bürgerliches Zeughaus until 1801 in order to restore them later [17] – but that is already another story…..

(The expression “touched by thunder” in the German language means approximately “to be dismayed” or “to be frightened”.)