Franz Schubert’s (1797 – 1828) famous and touching song cycle “Die schöne Müllerin” based on texts by Wilhelm Müller contains the song “Trockene Blumen” (Dry Flowers) shortly before the end. At this point in the story the journeyman miller has already lost the competition against the hunter for the favor of the beautiful miller’s daughter. The bouquet that the desired woman recently gave him has dried up – he himself now sees his only possibility in suicide.

All you little flowers,
The one she gave me,
You shall be laid
To the grave with me.

How do you all look
Hurt me so much,
As if you knew,
What happened to me?

All you little flowers,
How withered, how pale?
All you flowers,
Wet from what?

And Lenz will come,
And winter will be gone,
And become little flowers
Standing in the grass,

And little flowers lie
In my grave,
All the flowers,
The one she gave me.

And when she walks
Past the hill,
And think in your heart:
“He means it faithfully

Then all the flowers,
Out, out!
May is coming,
Winter is over.

Schubert completed the cycle “Die schöne Müllerin” in 1823. His publisher decided to publish the work in 5 individual issues at intervals of several months. Only in August 1824 the last of these issues contained the “Dry Flowers” as No.18.

However, already in January of the same year Franz Schubert composed “Introduktion und Variationen über ‘Trockene Blumen’ D 802” for piano and flute. At that time, hardly anyone knew the song, as it was not published until a few months later. So Schubert decided to use his own melody without being encouraged to do so by the enthusiastic audience. But this is exactly the case with many other variation works known to us. In this way, the melody loved and celebrated by the listener could be used again in another form, possibly also for earning a living or simply to reach even more people. Variation works and also arrangements of his own large instrumentations for small ensembles were therefore common, in order to bring works “among the people”). Apparently, however, this chamber music work is different.

Schubert’s first biographer Heinrich Kreißle von Hellborn reports that the Flute Variations were written for Ferdinand Bogner. At that time one could be flute professor at the Vienna Conservatory in a sideline job – and that was Bogner, who earned his money in his main job as chancellor at the Imperial and Royal Court Chamber. Schubert knew Bogner from the Vienna Musikverein and through his family ties to Anna Fröhlich, a pianist known to the city and a Schubert enthusiast. It was in her house that Schubert presented his song cycle and it is likely that Bogner particularly liked the theme of the 18th song, so that the composer chose precisely this song to write the desired virtuoso flute variations. What is unusual about the new work is that both instruments – including the piano – are extremely virtuosic. Always in interplay, the flute takes over the leading part and the piano accompanies, and vice versa. Schubert probably took advantage of the opportunity, as he knew in Anna Fröhlich an excellent pianist at Bogner’s side. The flute part is already very intense on the modern Bohemian flute. What must it have been like with the less movable flute of the 19th century?

The resulting duo work is technically unusually demanding for its time. Flutists of that generation could only fall back on a very sparse repertoire of high-class contemporary compositions. Moreover, pure virtuosity seems to have had a difficult time in those days. Brilliant and superficially effective works were rather negatively evaluated. Works of variations were better to develop the original theme further and give it its own form – beyond the structure “Theme and Variations 1 to x”. Incidentally, a good example of such a work with a further developed theme is Schubert’s own string quartet in D minor “Death and the Maiden”.

Here now some considerations to the art song and the variation work. 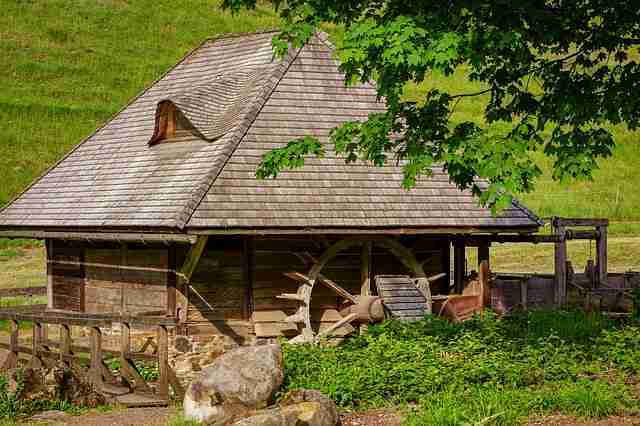 As already noted, we find ourselves at a turning point within the romantic events of the “Beautiful Miller”. The young journeyman miller had to admit to himself that the desired love affair with the beautiful miller’s wife was unattainable. Even at the beginning of the cycle, the protagonist speaks to the nature that surrounds him. “The beloved miller’s wife is mine!” he sings to the rushing brook that is his companion.

The lady of his heart, however, does not yet know anything about his love, devotion and later despair. Before he can reveal his feelings to her, she chooses the hunter. Even before our 18th song, the musical event turns from major to minor with the appearance of the rival – the hunter.

And at this point in the story, the dried flowers are now his contacts. With “All the little flowers she gave me…” begins a six-verse reflection in melancholy E minor about his longing for death and the dry flowers’ substitution for lost love begins. Only in the last two verses does he imagine – suddenly euphoric – his beloved passing by the grave and being reminded of him by the flowers growing out of the grave (“Then flowers all together – out, out! – May is coming – winter is over”) Here – at the very end of the song, and only 8 verse lines long – radiant E major is heard.

The dramaturgical sequence of the variation work is different. The “Dry Flowers” for flute and piano are introduced by an extensive introduction in E minor, which already makes use of the motives of the song. This solemn beginning moves the supposedly superficial variation work into a more serious neighbourhood. The “rhythm of death”, which the composer also used in “Death and the Maiden” and “The Wanderer”, is clearly recognizable. Above it the flute begins an elegiac lament in a rather low register. This lamentation increases in intensity until finally the heartrending turn of the first bars is taken up again. Now we hear echoes of the melody of the song and the introduction ends in a sad and tragic pianissimo. Great chamber music that belongs to the best Schubert composed!

The theme itself then quotes the actual song not quite literally. Afterwards the 7 variations follow and the 20-minute work also ends like the song itself in radiant E major. However, the chamber music work quotes the ecstatic closing phrase of the song “May has come, winter is over” in almost all variations. Schubert also often plays with the questioning fermata at the end of the minor part and the subsequent turn to the radiant major. Thus, the content of the song does not deal with what happens in the song, but rather focuses on the musical interplay between major and minor, the ups and downs of feelings. Thus a very varied work has been created, full of suspense until the end and with a great attraction for us musicians.

From today’s point of view it is no longer comprehensible why, for example, the musicologist Alfred Einstein(1880-1952) still stated the following long years after the work was written: “It grieves the admirer of Schubert to see a song of such unique intimacy (…) subjected to virtuoso treatment.

And the above-mentioned Heinrich Kreißle von Hellborn wrote: “The composition (…) gives the flute – and piano player (only) the opportunity to test their skill on the relevant instruments. Both are fully occupied with roulades, and the piece of music becomes (…) enjoyable only under the condition that it is performed with the same degree of fluency, purity and precise interaction.

We flautists of the 21st century regard Schubert’s “Dry Flowers” as a heavyweight in a positive sense. Not only because they are virtuosic and demanding, but also because they give us access to a world otherwise closed to flutists, at least in terms of chamber music. During this time very little great flute chamber music has been written.

Nor does the work appear to me to be superficial and superficially virtuosic. Each variation brings forth new, amazing and often very graceful figurations, new rhythmic transformations. One of the middle variations (No.3) is a beautiful, extremely lyrical intermezzo that takes up the theme, wooing it, elevating it and taking us into another world. In the following variation, the piano shines and the flutist completes the melody with varied ornaments.

Finally, the finale – after the introduction of the march theme derived from the song and the appearance of a triplet motif, we now experience the longest variation with over 80 bars (see Variation 1: about 20 bars). Interesting is this meeting of strict march and reluctant triplets, which are perhaps supposed to represent the stream… And once again we wander back and forth between heaven and hell, major and minor, life and death longing. Finally, however, intoxicating cascades of sound in both instruments lead to a jubilant conclusion.